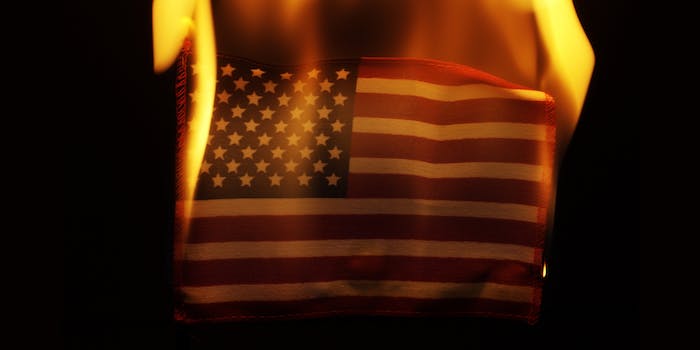 The president-elect wants to punish this constitutionally protected speech.

In his classic stream-of-consciousness style, President-elect Donald Trump took to Twitter Tuesday morning to declare that “nobody should be allowed to burn the American flag”.

Then, musing over some punishments that he believed should “perhaps” be put in place, he suggested flag burning protesters face a year in prison or “loss of citizenship.”

Trump’s outburst came at 7am ET, as a quick change in direction after ranting about CNN’s report on his claims of widespread voter fraud, despite having won the election. Into the wee hours Tuesday, Trump was tweeting voraciously at the network’s Washington correspondent Jeff Zeleney, who had mentioned that there was “zero evidence” of the alleged voter fraud.

Whatever Trump believes about flag burning, the act is currently a recognized First Amendment protected right, as settled in a 1989 Supreme Court ruling that declared it a constitutionally safeguarded “expressive conduct,” like free speech.

The outcome of that case, Texas v. Johnson, was naturally highly controversial but has held over more than two decades and multiple challenges. That same year, a law passed by Congress criminalizing flag burning was neutralized by the Supreme Court on the basis of its constitutionality.

That hasn’t stopped the motion being brought forward for debate on occasions since. In fact, in the most recent challenge to flag burning as a constitutional right, Trump’s presidential election rival, Hillary Clinton actually sponsored a bill in 2005 that “attempt[ed] to equate flag-burning with cross-burning.” It proposed up to a year in prison for offenders and a $100,000 fine, although the bill was defeated in 2006.

As for Trump’s proposed punishment of revoking citizenship, it appears that American law has plenty to say on that, too, with strict restrictions and few scenarios in which that can take place.

Still, the fact that a future president is actively considering the removal of citizenship as a means of silencing dissenting voices and protesters is a reminder for why some Americans so vehemently oppose his leadership.