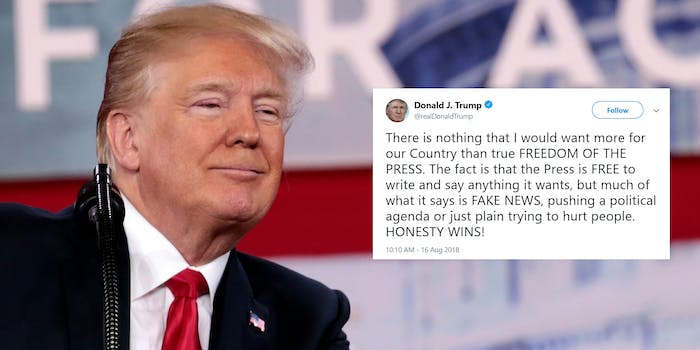 A coordinated statement by newspapers is undercut by the president on Twitter.

Newspapers across America this week pledged to publish editorials calling President Donald Trump‘s attacks on a free press harmful to the nation.

Here’s the New York Times, leading off with the infamous Thomas Jefferson quote about the First Amendment.

In 1787, the year the Constitution was adopted, Thomas Jefferson famously wrote to a friend, “Were it left to me to decide whether we should have a government without newspapers, or newspapers without a government, I should not hesitate a moment to prefer the latter.”

That’s because many believe the press to be a check on society’s worst impulses, whereas governments have the ability to augment and encourage those same bad impulses.

Now that Trump has had a Jefferson quote published in his general direction, we can surely expect him to change his ways, right? Well…

THE FAKE NEWS MEDIA IS THE OPPOSITION PARTY. It is very bad for our Great Country….BUT WE ARE WINNING!

The movement to publish simultaneous editorials was the idea of the Boston Globe. Here is its editorial: “Journalists are not the enemy.”

Replacing a free media with a state-run media has always been a first order of business for any corrupt regime taking over a country. Today in the United States we have a president who has created a mantra that members of the media who do not blatantly support the policies of the current US administration are the “enemy of the people.” This is one of the many lies that have been thrown out by this president, much like an old-time charlatan threw out “magic” dust or water on a hopeful crowd.

It is astounding that after three-plus years of covering Trump, the media might not see how this would play into Trump’s hands, but naturally, it did. Because what might one call hundreds of editorials condemning the president published at the same time?

There’s a word for it.

The Boston Globe, which was sold to the the Failing New York Times for 1.3 BILLION DOLLARS (plus 800 million dollars in losses & investment), or 2.1 BILLION DOLLARS, was then sold by the Times for 1 DOLLAR. Now the Globe is in COLLUSION with other papers on free press. PROVE IT!

Of course, people rallying together in support of an amendment is very legal and not collusion. At least they all gave Trump the opportunity to declare himself the biggest defender of a free press the world has ever seen.

There is nothing that I would want more for our Country than true FREEDOM OF THE PRESS. The fact is that the Press is FREE to write and say anything it wants, but much of what it says is FAKE NEWS, pushing a political agenda or just plain trying to hurt people. HONESTY WINS!

Trump argues that the press is only interested in “pushing a political agenda” that only serves to “hurt” people. Judging by responses to his tweets, many of his supporters seem to agree.

Editor’s note: This post has been updated for context and clarity.