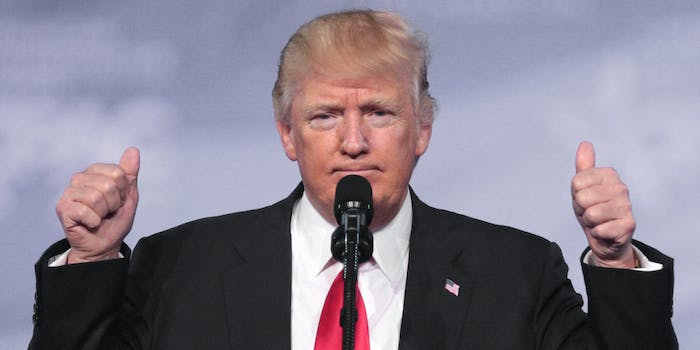 100 days in, Donald Trump is losing

For someone who is obsessed with winning, Donald Trump isn’t doing a very good job of it.

Prior to planned celebrations commemorating the president’s first 100 days in office—a benchmark used to judge the success of the early presidency going back to Franklin Delano Roosevelt—Trump bragged to a crowd in Kenosha, Wisconsin, about his litany of accomplishments since the January inauguration. “No administration has accomplished more in the first 90 days,” he boasted. White House Press Secretary Sean Spicer touted the decrease in border crossings this year, as well as the 500,000 jobs created in 2017. Tellingly, a press release from the president also cited his travel ban, which has twice been stymied by federal courts.

But three months into the new administration, Trump has failed the presidency by virtually every possible standard, including his own. Prior to the election, Trump’s campaign released the “Contract with the American Voter,” a document spelling out everything he pledged to do as commander-in-chief. The Chicago Tribune noted that of the 38 specific promises listed on the document, he has only fulfilled 10 of them, a 26-percent ratio. If he were being graded in school, that kind of score wouldn’t just earn him an F. That’s basically a G.

It only gets worse from there. Of the 10 legislative efforts Trump planned to spearhead, not a single one has come to fruition. Roosevelt, in comparison, passed 15 bills during his first 100 days. The campaign to “repeal and replace” the Affordable Care Act has repeatedly crashed and burned, with a shell-shocked president claiming that “nobody knew health care could be so complicated.”

Another last-minute rally to push for a Republican vote on Obamacare before the 100-days mark—in order to give Trump a much-needed win—struck out, just as the the president has so many times during his short stint in the Oval Office.

Trump’s utter ineffectiveness isn’t merely the result of an energized left that has vowed to oppose every single policy designed to attack and strip away the rights of marginalized communities; it’s his own bureaucratic ineptitude. Trump—who has spent much of his time golfing or lounging at the Mar-a-Lago, his private Florida resort—has shown little interest in how government works or even the basic duties of the presidency. That has resulted in his executive orders being continually blocked and challenged for their constitutionality. It’s led to a White House where many offices and positions remain vacant, another empty mansion for its landlord to occupy.

The president is a leader without governance, a president without an office, and a man without a country. Trump can try to save face with a tax reform Hail Mary, a brief proposal that New York magazine has called “a one-page assemblage of campaign bullet points full of hyperbole, bereft of most crucial details, and tied to no legislation.” But the man who has filed bankruptcy six times will keep doing what he has always done—drive his office into the ground until he cashes out.

Just this week, Trump planted himself on the whoopee cushion of the legal system yet again. On Tuesday, a San Francisco judge halted an executive order that would have denied money to sanctuary cities, a term for municipalities that offer asylum to undocumented workers. His prior order barring entry from seven majority Muslim nations has been repeatedly blocked by federal courts, while Trump has announced that a proposed wall between the U.S. and Mexico is likely not in the fiscal budget for 2017. The president’s absurd claims that our neighbors to the south would pay for its construction were met with hostility and mockery by Mexican President Enrique Peña Nieto’s government.

Trump’s administration has been as impotent as his policies. The White House bureaucracy has been beset by frequent leaks from within its ranks and reports of infighting, which allegedly forced former Breitbart executive chairman Steve Bannon out of his role as the chief strategist to the president. Bannon and Jared Kushner, Trump’s son-in-law, just couldn’t get along. While the president has filled major roles in the White House with loyalists and yes men, the Miami Herald reports that that Trump has yet to rehire for 85 percent of federal positions requiring confirmation from the Senate, which includes some major cabinet spots.

The level of ineptitude in the Oval Office is historic. The lack of vetting for key officials led to the ouster of Lt. Gen Michael Flynn, who was asked to resign just three weeks after being named National Security Adviser over allegations that he lied about connections to Russia. He boasts the shortest tenure in the history of the office. Former Alabama Sen. Jeff Sessions will have to recuse himself from any subsequent investigations into the role of Russian hacking of political entities during the 2016 election after reports the attorney general lied during his confirmation.

Trump’s few weeks in office have likewise been ridden with scandal—from the White House violating ethical standards to promote the president’s private businesses to details emerging about his possible ties to Russian President Vladimir Putin. Even his so-called “victories” are suspect. After a year of Republican gridlock over the appointment of Obama pick Merrick Garland to the Supreme Court, Justice Neil Gorsuch was confirmed to the bench earlier this month, a right-wing jurist who fulfills Trump’s pledge to appoint a justice “in the mold of Scalia.” What got Gorsuch there, however, was not the president’s wheeling and dealing but Sen. Mitch McConnell. The Majority Leader circumvented a Democratic filibuster by using the “nuclear option” to get the Colorado judge appointed. That’s McConnell’s win, not Trump’s.

The president, who has yet to shepherd the passage of any major piece of legislation, will continue to talk a big game, but his braggadocio is nothing but clown and fury. Trump trumpets his many executive orders—which number 77, the most since Truman. These orders have not only accomplished very little, but they also break one of his key campaign promises: The POTUS claimed during the 2016 election that he would not use the Oval Office to act unilaterally, decrying the federal overreach of the Obama presidency.

Trump has claimed Hillary Clinton paid immigrants to vote in the election and that he was illegally wiretapped by Obama. Neither has proven to be true. He has said that he would find evidence to back up his allegations when they were proven false. He has not. The president said he would invest $1 trillion in infrastructure. He has not. In a 2016 speech at the New York Economic Club, Trump said that he would advocate on behalf of a “silent nation of jobless Americans” and “fight to bring prosperity to every part of this country.” He will not. Trump’s soon-to-be unveiled tax plan will lead to the most drastic cuts for the wealthy in history, benefitting his friends, donors, his own family, and himself.

After the Electoral College voted Trump into office, his supporters asked the country to “give him a chance”—to let the president have a fair shot at leading the country before judging him. America has given Trump a chance, but he has squandered it at every possible opportunity. Trump is losing, and make no mistake, he is losing badly. The people who will pay for those losses, however, aren’t the administration officials who continue to be record-breakingly unpopular. It’s a beleaguered public who has to put up with 1,360 more days of this shit, as well as decades of political repercussions. No one will win.