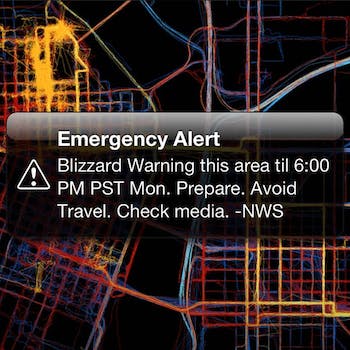 Well, this should be interesting.

By now, you may have noticed that President-elect Donald Trump has a real zest for firing off tweets when something isn’t to his liking.

Whether he’s demanding apologies from the cast of Hamilton, sneering at SNL, or claiming voter fraud with retweets of 16-year-old supporters as his main evidence, Trump let’s us know exactly how he’s feeling when he feels. But in a chilling twist, New York Magazine reports that, once president, Trump may be able to send his rants direct to your phone.

You think Trump's tweets are bad? Wait until he has control over the completely unblockable presidential alerts on your cell phone.

Congress demanded that carriers make presidential alerts unblockable. So now you'll be getting the 3 am phone call.https://t.co/XPHaL9NHNq

That’s right, as commander-in-chief, President Trump will have the power to send Wireless Emergency Alerts (or WEAs) to every single cellphone in America.

You’ve already received WEAs, usually in the form of severe weather warnings or Amber alerts. They appear on our phones with a shrill alarm tone and share important information to ensure our safety and the safety of others.

The government put WEAs into use in 2006, after Congress passed the Warning, Alert, and Response Network (WARN) Act. The law allows the government to employ cell towers to deliver targeted messages to cellphones in an affected geographic area; in the case of a national emergency, messages can go out to all cellphones nationwide.

According to the Federal Communications Commission, there are three reasons a WEA can be issued, resulting in three types of alerts. And one of these types cannot be blocked. Can you guess which one?

What alerts does WEA deliver?
Alerts from WEA cover only critical emergency situations. Consumers will receive only three types of alerts:

1. Alerts issued by the President

Participating carriers may allow subscribers to block all but Presidential alerts.

Yes, unfortunately, unlike Amber Alerts, life-threatening weather warnings, and that one ex who checks in every six to eight months, Trump will be unblockable.

While it’s nightmarish to imagine a world where Trump can send his would be 3AM rage-tweets delivered direct to our phones, there are some checks and balances in place that may protect us from waking up inside our very own episode of Black Mirror.

Issuing a 90 character WEA is not as simple as popping open Twitter, typing one’s thoughts and hitting “Send.” WEAs are issued through FEMA’s Integrated Public Alert & Warning System. This means that even a presidential emergency alert must pass through at least one layer of vetting before being issued. While FEMA is controlled by the executive branch—the president appoints the head of FEMA, and he or she reports to the Department of Homeland Security—the agency would undoubtedly maintain an interest in not seeing their alert system exploited for non-emergencies.

Using the system also requires a bit of time and effort. Those with access to the system have usually taken at least two training courses. Trump, who rarely uses a computer and has opted out of daily intelligence briefings in favor of weekly sessions, may decide it simply isn’t worth his time. This means, in order to issue a WEA, Trump would have to rely on support staff. If he presented them with a tweet-storm like series of alerts denouncing the media for posting that one unflattering turkey neck photo over and over again, they might do the right thing and let the American public live in peace.

Another factor to consider is that WEAs come with no validating faves or retweets. We all know the thrill of that little endorphin rush that comes with a bump on social media. Trump particularly enjoys being adored—he has often praised those who praise him, and his most virulent tweets come when he feels he’s not being cheered on.

My rallies are not covered properly by the media. They never discuss the real message and never show crowd size or enthusiasm.

So, he may have little interest in issuing messages without the promise of thousands of signals of admiration and support.