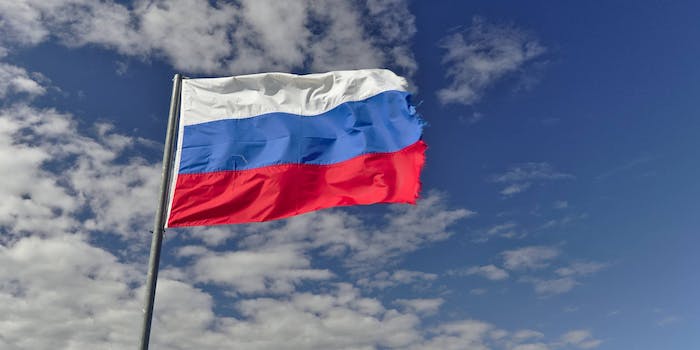 Trump's call for a foreign government to interfere with a U.S. election is likely unprecedented.

At a Wednesday morning press conference in Florida, the Republican nominee for president both denied that Russia was involved with the hack and then specifically asked Russia to release emails from Hillary Clinton‘s personal email servers, which the FBI found were vulnerable to hackers.

Contradicting U.S. intelligence agencies who are reportedly increasingly sure that the Russian government is behind the hack of the Democratic National Committee, Trump said the hack was “probably not” Russia. He didn’t expand on what that assertion was based on.

Nevertheless, he has a request of President Vladimir Putin.

“It would be interesting to see, I will tell you this, Russia, if you’re listening I hope you’re able to find the 30,000 emails that are missing,” Trump said. “I think you will probably be rewarded mightily by our press.”

At the same time, Trump refuted allegations that he has business ties to Russian oligarchs and claimed, “I don’t know who Putin is. He said one nice thing about me. … I never met Putin.”

Trump previously said he an Putin were “stablemates” when both men were interviewed by 60 Minutes.

Trump doubled-down on his encouragement of Russian hackers in a tweet.

If Russia or any other country or person has Hillary Clinton's 33,000 illegally deleted emails, perhaps they should share them with the FBI!

The hack of the DNC and subsequent leak of nearly 20,000 emails from Democratic Party operatives by WikiLeaks has caused upheaval in Clinton’s race for the White House, with polls showing Trump now leading a head-to-head contest between him and Clinton.

Trump’s request for Russia to hack Clinton, a former secretary of state, is likely the first time a major presidential candidate requested an attack, albeit a cyberattack, on the United States. The Clinton campaign quickly condemned Trump’s remark, calling it a “national security issue.”

“This has to be the first time that a major presidential candidate has actively encouraged a foreign power to conduct espionage against his political opponent,” Jake Sullivan, a senior policy advisor for Clinton, said in a statement. “That’s not hyperbole, those are just the facts This has gone from being a matter of curiosity, and a matter of politics, to being a national security issue.”

The newly released Republican platform asserts that the U.S. ought to “respond in kind and in greater magnitude” to cyberattacks.

“Russia and China see cyber operations as part of a warfare strategy during peacetime,” the platform reads. “Our response should be to cause diplomatic, financial and legal pain.”

Although significant evidence points toward Russia, definitively proving the origins of cyberattacks is notoriously difficult or even, in many cases, impossible. That’s doubly true when a nation like Russia, one of the most sophisticated and effective nation-state actors in cyberspace, is involved.