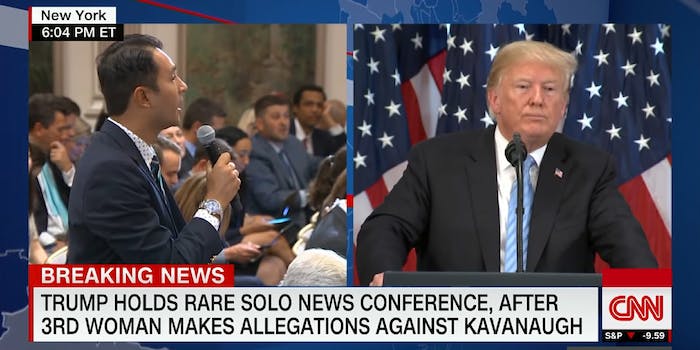 TruNews is just the latest conspiracy theory site to get access to the president.

TruNews is run by Florida talk radio host and minister Rick Wiles and traffics in pro-Trump, religiously-influenced content. Wiles puts out videos called “Morning Manna,” which have titles like, “What’s your race? Saved or lost,” tells Jewish people they need to return to God, and asks, “Must you be born again so that your soul is saved for eternity? The answer is yes.”

It’s also full of conspiracy theories, including one that Queen Elizabeth is a lizard and the Clintons are cannibals, and that “leftists” are poised to start killing Christians and conservatives to “purge American society.”

TruNews Correspondent Edward Szall, who Trump called on, has written such gems as, “More disturbing content by Rick and Morty creators unearthed,” and asked, “How much longer will Christians—and more importantly, God—tolerate this darkness in America?”

Szall asked President Trump about his comments regarding a two-state solution for Palestine and Israel.

“But the whole, my life, I’ve always heard the deal between, as you know, Israeli and the Palestinians, that’s like the toughest deal. Every possible thing is tough about that. I think we’re gonna make a deal. I think we’re gonna make a deal. So, uh, at one of our many meetings today I was with Bibi Netanyahu, a man I have a lot of respect for, a man who has been extremely nice to me, we’re very happy that I did the whole thing with Jerusalem and the embassy, which by the way we’re gonna open in four months for less than $500,000.”

This was just one shocking moment in an off-the-rails press conference in which Trump claimed that China respected his big, giant brain and that women accusing Brett Kavanaugh of sexual assault are part of a Democratic con job.

TruNews is not the only questionable outlet to have White House credentials. The Gateway Pundit and Infowars have both been given access to the briefings in the past.