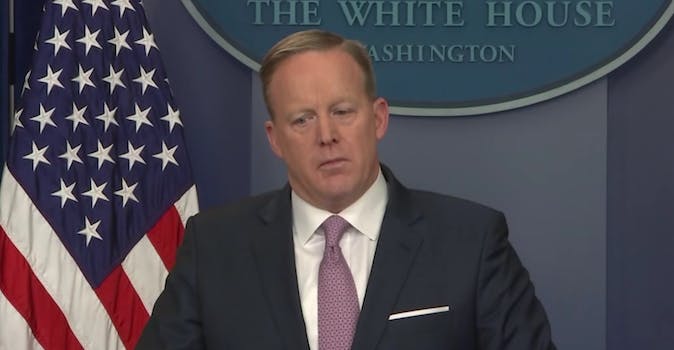 President Donald Trump is “extremely confident” that the Justice Department will find evidence to back up his unsubstantiated claims that the Obama administration wiretapped Trump Tower in the run-up to the presidential election.

Press Secretary Sean Spicer told journalists at Tuesday’s White House briefing that the president believed that the evidence would “vindicate him.”

“I think there’s significant reporting about surveillance techniques that existed throughout the 2016 election,” Spicer continued in response to a question about the allegations.

Trump tweeted his claims two weeks ago, alleging that his predecessor had surveilled him during his election campaign.

While former President Barack Obama denied that he had ordered Trump to be wiretapped, Democrats and senior Republicans like Sen. John McCain (R-Ariz.) called for Trump to publicly back up his claims with evidence or retract his allegation altogether. Instead, Trump’s administration called on Congress to deliver the evidence and repeatedly cited unspecified news reports of wiretapping in press conferences.

In fact, only one day ago, at Monday’s daily briefing, Spicer himself appeared to be actively trying to withdraw on Trump’s initial outburst, saying that the president had “used the word ‘wiretaps’ in quotes to mean, broadly, surveillance and other activities.”

However, a close look at the tweeted allegation leaves no question that the President was asserting that Obama had targeted him personally—not broadly spying on the campaign team.

As such, Tuesday afternoon’s briefing then indicates a freshly consolidated position on the part of the White House behind the tweeting president and his unsubstantiated claims.