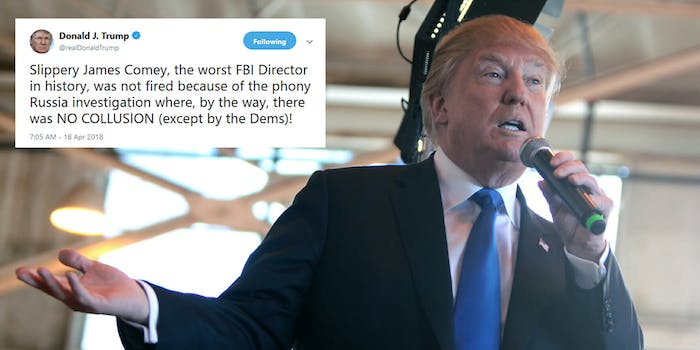 Trump contradicts himself, says Russia wasn’t why he fired Comey

He had some different ideas last May.

President Donald Trump insisted that former FBI Director James Comey was “not fired because of the phony Russia investigation” despite telling NBC’s Lester Holt that the probe was on his mind when he fired the director during an interview last year.

Trump’s attacks on Comey have been consistent in recent days as the former FBI director has been the subject of numerous interviews, including a much-hyped one on ABC over the weekend where he compared the Trump presidency to a forest fire and went into detail about the president’s possible pee tape.

On Wednesday morning, Trump continued to press back against Comey, this time seemingly contradicting his previous statements about why he fired the FBI director last May.

“Slippery James Comey, the worst FBI Director in history, was not fired because of the phony Russia investigation where, by the way, there was NO COLLUSION (except by the Dems)!” Trump wrote on Twitter.

Slippery James Comey, the worst FBI Director in history, was not fired because of the phony Russia investigation where, by the way, there was NO COLLUSION (except by the Dems)!

Last May, Trump spoke very differently about his decision to fire the former FBI director.

During an interview with Holt, Trump said “this Russia thing” was on his mind when he decided to fire Comey.

“And in fact when I decided to just do it, I said to myself, I said ‘you know, this Russia thing with Trump and Russia is a made-up story, it’s an excuse by the Democrats for having lost an election that they should have won,'” he said at the time.

The president’s attacks against Comey are just part of what appears to be an effort among Republicans to fight back amid the former FBI director’s interviews as his book, A Higher Loyalty, hits shelves.