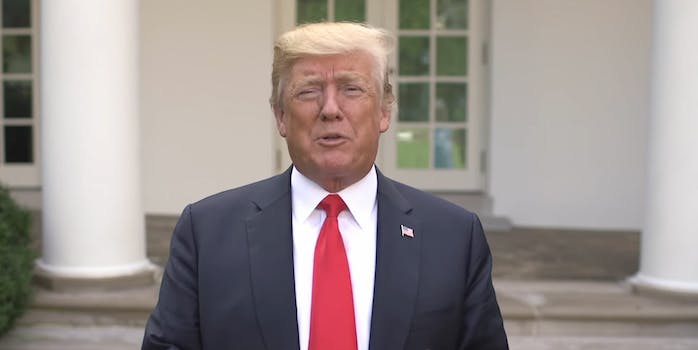 Was he actually trying to color ... the Russian flag?

Once again, President Donald Trump messed up a piece of basic American knowledge that even elementary school students know.

The president—who forgot the lyrics to the national anthem earlier this year—joined a group of children at a Columbus, Ohio hospital this past week as part of a program to raise awareness of the effects of opioid abuse on infants. As part of the photo op, Trump sat down at a children’s table with young patients and spent some time coloring the U.S. flag and talking with the kids. In what can only be described as either a Freudian slip or just ignorance, the President seems to have colored the stripes blue.

The initial photos came courtesy of Department of Health & Human Services Secretary Alex Azar, who joined the president and first lady Melania Trump at the event.

The opioid crisis is one of our top priorities at HHS, with a drumbeat of action on the full range of efforts where we can assist local communities. Today, I joined @POTUS & @FLOTUS in Ohio to learn how states and communities are responding to the challenge of opioid addiction. pic.twitter.com/NwxSoeNznA

It was another Twitter user by the name of Talia (@2020Fight) that publicized an additional picture of the event, a closer look at the president’s coloring sheet. Both photos from Azar and Talia show the president has colored in at least one stripe on the American flag blue.

The internet was swift to react to the images, some noting Trump’s hypocrisy of criticizing protesting NFL players for “disrespecting” the flag when he can’t even color it correctly. Some have even pointed out the funny possibility that he was subconsciously trying to draw the Russian flag.

Trump coloring a blue stripe on the American flag could be the most revealing Freudian slip of all time. pic.twitter.com/ItXftDSBlY

Trump is cheating on the coloring test. pic.twitter.com/IUzOSaZcTD

Come for Trump coloring the flag wrong, stay for the boy who knows his is right and clocked the President trying to copy it. pic.twitter.com/VEzsRUL85G

I like the theory that he was going for the Russian flag here. And screwed that up too. https://t.co/uDBx3jZt3P

It’s yet another gaffe from a president who we assume should know better.