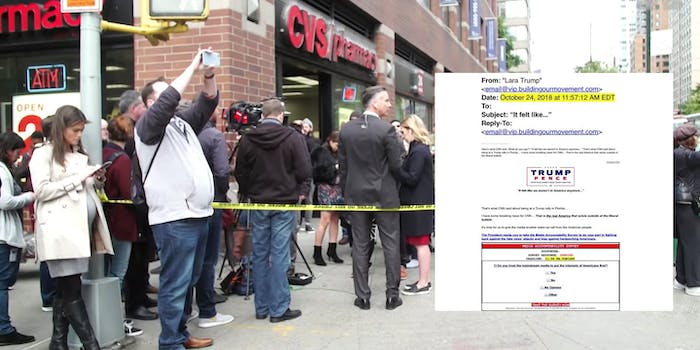 The email was sent hours after CNN evacuated its New York offices.

A Trump campaign manager issued an apology Wednesday after the campaign circulated an email bashing CNN. The email came just hours after the news network evacuated its New York office because a package containing a potential explosive device was sent there.

The Hill reports that the campaign email condemned CNN and included a “media accountability survey”  described as a tool to combat “fake news’ attacks and bias against hardworking Americans.”

Brad Pascale, the campaign manager, said in a statement to CNN that the email “unfortunately was a pre-programmed, automated message that was not caught before the news broke.”

“We apologize for this,” Pascale said in the statement. “We in no way condone violence against anyone who works for CNN, or anyone else.”

CNN evacuated its New York office following reports of a suspicious package, which was reportedly addressed to former CIA director John Brennan (an MSNBC, not CNN, contributor). A photo of the package’s contents was scrutinized on Twitter because the pipe bomb appeared to be decorated with an Islamic State flag.

The intercepted package at CNN was one of several containing potential explosive devices discovered Wednesday. Others targeted former President Barack Obama and Hillary Clinton. Law enforcement officials are still investigating the source or sources of the attacks.