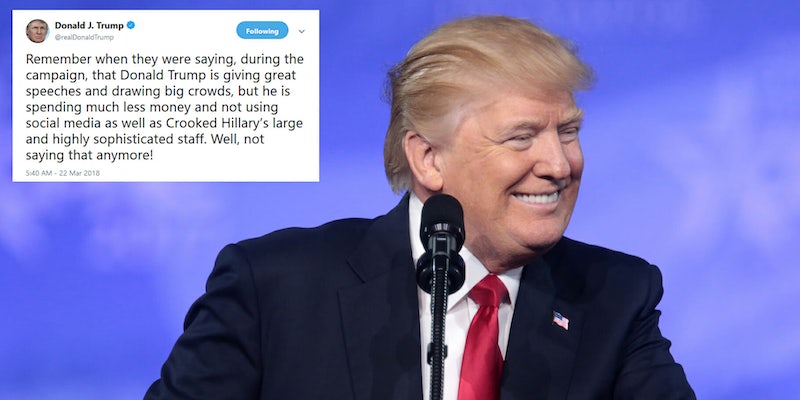 Trump appears to brag about campaign’s use of Cambridge Analytica

The timing is suspect.

President Donald Trump appeared to gloat about his presidential campaign’s use of Cambridge Analytica, the data firm that has come under fire in the last week for harvesting information on Facebook users without their knowledge.

On Thursday, Trump tweeted that people were “not saying” that his social media use during the campaign wasn’t as robust as Hillary Clinton’s in an apparent boast about how people now can’t stop taking about his campaign’s data operation.

Cambridge Analytica worked with Trump’s 2016 campaign and has been criticized recently after reports suggested that it acquired data on more than 50 million Facebook users without their knowledge.

“Remember when they were saying, during the campaign, that Donald Trump is giving great speeches and drawing big crowds, but he is spending much less money and not using social media as well as Crooked Hillary’s large and highly sophisticated staff. Well, not saying that anymore!” the president tweeted.

Remember when they were saying, during the campaign, that Donald Trump is giving great speeches and drawing big crowds, but he is spending much less money and not using social media as well as Crooked Hillary’s large and highly sophisticated staff. Well, not saying that anymore!

While the president does not specifically call out the data firm by name, the timing of the tweet—given the intense scrutiny surrounding Cambridge Analytica—makes it seem likely Trump was referring to them.

Cambridge Analytica, funded by Republican mega-donor Robert Mercer and which at one time had Steve Bannon as a high ranking official, got user data for 50 million people after a professor created a personality quiz on Facebook that took information about their friends as part of the agreement to use it. Facebook said the professor, Aleksandr Kogan, “lied” to them about the nature of his work. On Thursday Facebook CEO Mark Zuckerberg released a statement trying to quell the criticism.

Zuckerberg said Cambridge Analytica misled the company after Facebook asked them to delete the data they had collected on millions of Facebook users.

Trump’s tweet came the day after ABC News reported that people who worked in Trump’s campaign and were close with Cambridge Analytica met with Special Counsel Robert Mueller’s team.

The staffers mostly were employed by the Republican National Committee, according to the news outlet, but worked closely with Trump’s team and the data firm.

Cambridge Analytica has denied any wrongdoing.