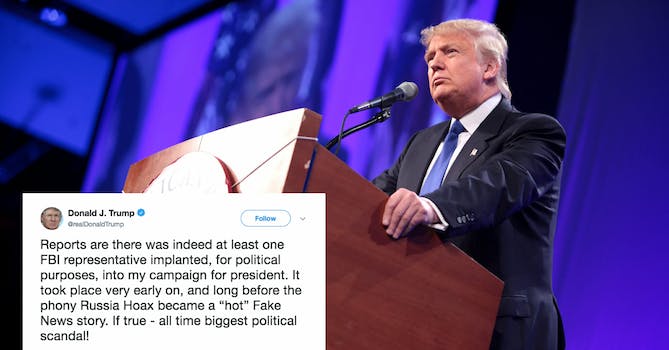 President Donald Trump continued his days (and years)-long tirade against the FBI on Friday, calling the news that the agency had an informant working with his campaign the “all time biggest political scandal’.”

Wrote Trump on Friday morning: “Reports are there was indeed at least one FBI representative implanted, for political purposes, into my campaign for president. It took place very early on, and long before the phony Russia Hoax became a “hot” Fake News story. If true—all time biggest political scandal!”

Reports are there was indeed at least one FBI representative implanted, for political purposes, into my campaign for president. It took place very early on, and long before the phony Russia Hoax became a “hot” Fake News story. If true – all time biggest political scandal!

The proclamation of “if true – all time biggest political scandal” comes just hours after he tweeted that it was “really bad stuff.”

“Apparently the DOJ put a Spy in the Trump Campaign. This has never been done before and by any means necessary, they are out to frame Donald Trump for crimes he didn’t commit.” David Asman @LouDobbs @GreggJarrett Really bad stuff!

Trump has previously called the scandal “bigger than Watergate.”

At the heart of Trump’s tweets is the news that has brewed during the past week that there was a “secret intelligence source” working with the FBI to feed them information on the Trump campaign. According to the New York Times, the source met with two different members of Trump’s campaign.

As the news broke, conservatives online tried to out the source, while Rep. Devin Nunes (R-Calif.) has pushed the Justice Department on information about who was working with the government.

Trump—and his supporters—believe that this is the latest smoking gun in the government’s nefarious plot to keep Trump from ascending to the highest office. Trump’s claim that the informant started before the Russia scandal began is proof that, from the onset, the government didn’t want Trump to win the presidency, and that the Russia investigation is just another ploy to take him down.

However, Trump’s assertion is undercut by the fact that the FBI, as opposed to releasing news that the Bureau was investigating the president for colluding with Russia as a way to keep him from winning, didn’t actually release that information.