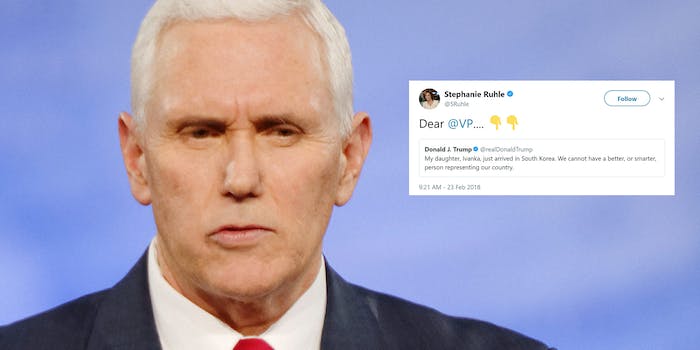 President Donald Trump tweeted this morning that his daughter Ivanka had just landed in South Korea ahead of the closing ceremony of the Winter Olympics. “We cannot have a better, or smarter person representing our country,” the tweet says.

My daughter, Ivanka, just arrived in South Korea. We cannot have a better, or smarter, person representing our country.

Others enthusiastically appreciated the shade possibly (intentionally? accidentally?) thrown at the vice president.

who wants to tell him @VP was there last week https://t.co/C9ECUoZMb6

The syntax of the president’s tweet was also poked fun at, implying there are much better choices, but Trump instead sent his child.

The trouble with writing Tweets yourself is that there is no-one to check if it can be read in the wrong way, https://t.co/nnmyplySRv

i mean he's right, we cannot, he won't allow us to, but it's a weird thing to tweet about your kid https://t.co/dMmdWpvoHJ

There are two very different ways to read this https://t.co/V71R56rsTl

Pence has had a couple of missteps during the Games. He snubbed Kim Yo Jong, the sister of North Korean dictator Kim Jong Un, at the Opening Ceremonies, and refused to stand for the historic joint Korean team as it entered the stadium. His request for a tete-a-tete with Adam Rippon, the surprise sweetheart of the 2018 Games, was also repeatedly rebuffed by the figure skater.

Perhaps most damaging, Pence was set to meet with North Korea during the Games to discuss that country’s nuclear program. North Korea reportedly canceled at the last minute.

The younger Trump will attend the Closing Ceremony while in South Korea and will have dinner with South Korean President Moon Jae-in on Friday. Her presence is seen as an attempt to right Pence’s diplomatic errors at these Olympics.

“In symbolic terms, the Trump Administration clearly lost round one against the North Koreans and the president hopes maybe Ivanka Trump’s star power will lead to a better outcome at the games’ end,” said Evan Resnick, coordinator of the U.S. Program at the S. Rajaratnam School of International Studies, in an interview with CNN.