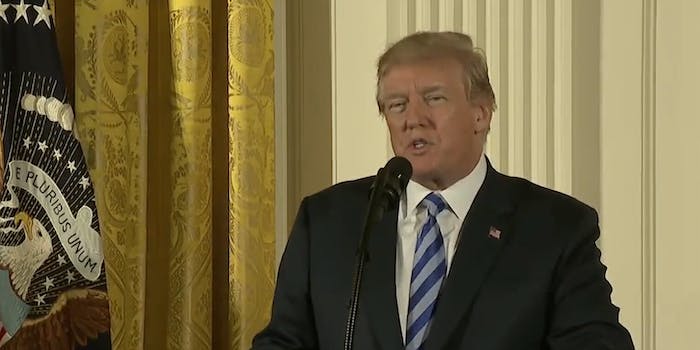 Trump said he directed Attorney General Jeff Sessions to propose the new regulations, which would come amid persistent pressure from activists following the school shooting in Parkland, Florida, which left 17 people dead.

“Just a few moments ago I signed a memorandum directing the attorney general to propose regulations to ban all devices that turn legal weapons into machine guns,” Trump reportedly said at a Medal of Valor event at the White House. “The key in all these efforts… is that we cannot merely take actions that make us feel like we are making a difference. We must actually make a difference.”

Trump added that he wanted the regulations to be finalized “soon.”

“I can tell you that the President doesn’t support use of those accessories,” Sanders said.

“Bump stocks” are legal mechanisms that convert semi-automatic weapons into fully automatic weapons. Shortly after the Las Vegas shooting, which killed 59 people and wounded more than 500 others, it was determined that the shooter, Stephen Paddock, 64, used the device.

It was reported that Paddock had two bump stock devices in his room where police found him dead. It has not been said whether Nikolas Cruz, 19, the shooter identified in the school shooting in Florida, used such a device when he shot people in Marjory Douglas High School.