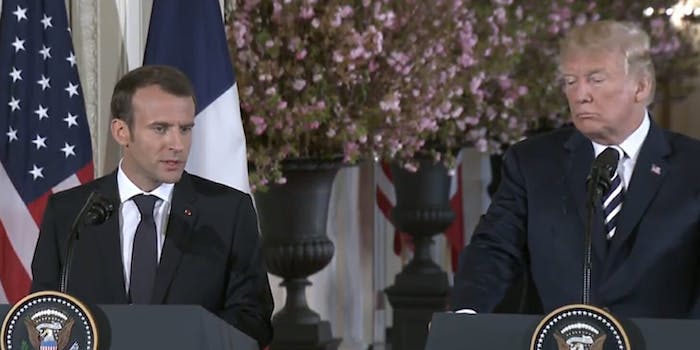 While the two leaders have had some odd moments in the past several months, most notably a war of most-impressive-handshakes, one quick moment on Tuesday was particularly awkward.

Posing for photos in the Oval Office on Tuesday as part of Macron’s visit to the United States, Trump paused, mid-sentence, to brush off “dandruff” off the French president to “make him perfect.”

Trump then eyed Macron’s shoulder and brushed it.

“In fact, I’ll get that little piece of dandruff off,” the president said, wagging his finger along Macron’s shoulder as he smiled awkwardly.

“We have to make him perfect,” the president said, putting his arms out at the cameras. “He is perfect.”

Trump on Macron: “We have a very special relationship, in fact I’ll get that little piece of dandruff off…we have to make him perfect, he is perfect.” https://t.co/GGsfve3KYB pic.twitter.com/vzV2Dech86

Trump has been known to obsess over how those in his orbit present themselves, so perhaps it’s unsurprising that he would brush off Macron’s “dandruff” despite the fact that no one would have noticed it otherwise.

The president finished the photo spray by calling Macron a “special friend.”