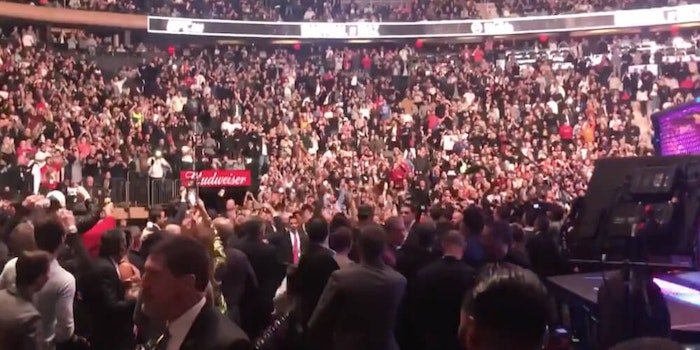 This marks the second time within a week that Trump was booed.

There are only a few things certain in life: taxes, death, and now President Donald Trump getting booed at various sporting events.

Upon entering the arena–along with other republicans, Eric Trump, Donald Trump Jr., and the UFC President Dana White–he was met with a barrage of boos from the crowd.

Trump getting booed at UFC! LMAO! Even there?! pic.twitter.com/qzISfRBOfq

There was also an anti-Trump protest outside the arena in what was once his place of residence.

Despite the overwhelming footage that shows otherwise, Trump Jr. is claiming the arena “was overwhelmingly positive” and that White said “it was the most electrifying entrance” he had seen in his 25-year career with the UFC.

Despite the bullshit from blue checkmark Twitter, when we walked into the arena it was overwhelmingly positive. @danawhite said it was the most electrifying entrance he seen in 25 years of doing this. @ufc https://t.co/62dAdDimGD

This marks the second time within a week that Trump was booed at a sporting event. On Sunday, he attended Game 5 of the World Series between Washington Nationals and the Houston Astros in Washington, D.C. Upon being introduced to the stadium on the big screen, Nats fans booed Trump and chanted, “Lock him up.”

The two incidents in tandem led #TrumpBooedAgain to trend on Twitter.

I like that Trump thought he’d finally find unity at an event called “Ultimate Fighting.”#TrumpBooedAgain https://t.co/RtFBMvG9nD