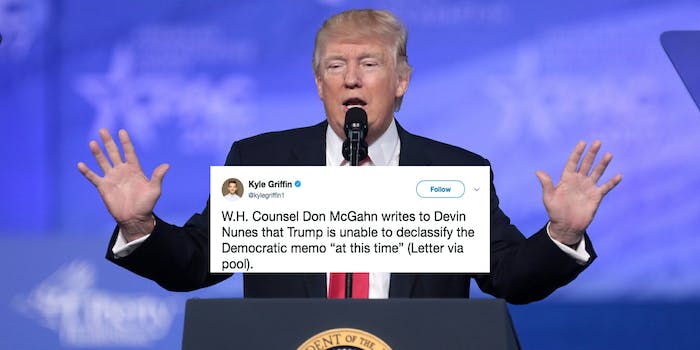 President Donald Trump delayed on Friday the release of a Democratic memo that’s meant as a rebuttal to the controversial FISA memo that was released by Republicans last week.

In a letter to the House Intelligence Committee, White House counsel Don McGahn said even though Trump is “inclined” to declassify the Democratic memo, “because the Memorandum contains numerous properly classified and especially sensitive passages, he is unable to do so at this time.”

W.H. Counsel Don McGahn writes to Devin Nunes that Trump is unable to declassify the Democratic memo “at this time” (Letter via pool). pic.twitter.com/DDRJtKz7s4

The Republican memo, written by Rep. Devin Nunes (R-Calif.), accuses the FBI and the Department of Justice (DOJ) of omitting that a dossier of alleged Trump-Russia contacts was paid for in part by the Democratic National Committee. The so-called Steele dossier was used when the FBI and DOJ obtained a warrant to surveil Trump campaign adviser Carter Page.

The White House declassified the GOP memo—which is essentially Nunes’ interpretation of still-classified documents—despite objections from the FBI and the DOJ.

Rep. Adam Schiff (D-Calif.) wrote the 10-page Democratic rebuttal memo, and the House Intelligence Committee voted in favor of its release on Monday. Schiff said his memo “will help inform the public of the many distortions and inaccuracies” in the GOP memo.

Democrats reportedly saw Trump’s move to stall the release of the Democratic memo as a “double standard.”

“The rationale for releasing the Nunes memo, transparency, vanishes when it could show information that’s harmful to him,” Senate Minority Leader Charles Grassley (D-N.Y.) said. “Millions of Americans are asking one simple question: what is he hiding?”

The Democrats sent a very political and long response memo which they knew, because of sources and methods (and more), would have to be heavily redacted, whereupon they would blame the White House for lack of transparency. Told them to re-do and send back in proper form!