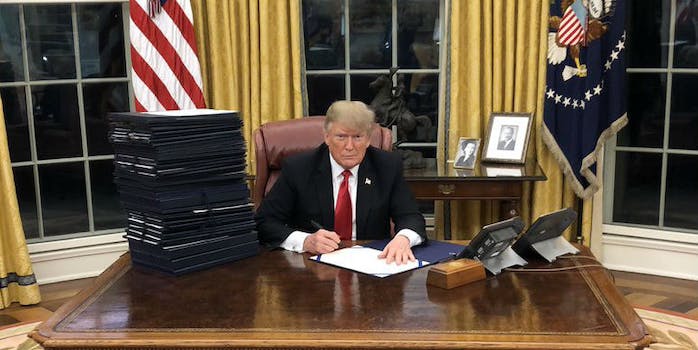 It's not the first time Trump has been accused of producing fake documents.

On Friday, President Donald Trump tweeted out a single picture of himself sitting at the Oval Office’s Resolute desk with the caption: “Some of the many Bills that I am signing in the Oval Office right now. Cancelled my trip on Air Force One to Florida while we wait to see if the Democrats will help us to protect America’s Southern Border!” However, it appears the president was signing a blank piece of paper.

Some of the many Bills that I am signing in the Oval Office right now. Cancelled my trip on Air Force One to Florida while we wait to see if the Democrats will help us to protect America’s Southern Border! pic.twitter.com/ws6LYhKcKl

It’s unclear what bills the president was signing, although he has a sizeable stack of black folders next to him in the photo. It didn’t take long for social media to notice the suspiciously blank page, with some calling the “bill” a likely prop.

You are signing a blank piece of paper. Do you not know people can zoom in on these you cretin? #ResignTrump https://t.co/HE5wyQH6zN

Twitter user @cbouzy, who describes himself as a software engineer and creator of a bot detector, managed to invert the original photo, which ostensibly should highlight any black text on a white background. No text can be found in the inverted Trump picture.

It’s not the first time Trump has been suspected of producing fake documents to prove something.

In December 2017, Trump held his first press conference in more than six months, where he produced a large number of suspiciously pristine manila folders. The point of the press conference was to assert that Trump had indeed divested himself from his various businesses and given the reins over to his sons, Donald Trump Jr. and Eric Trump. Reporters were not allowed to view anything inside the stack of folders, which did not appear to bear labelings or page markings.

Remember when Trump did a news conference beside huge stacks of blank paper to “prove” he had no conflicts of interest? Good times. https://t.co/iWofkFiGvX

and remember when trump had a ton of blank papers n blank files piled on a table as he gave a presser? fugazi on a hundred, thousand trillion.

I have no words. Neither does the “bill” that the “president“ is signing. It is literally a blank sheet of paper, same as his pile of divestiture papers of the Trump Crime Family. This is a fail. #TrumpResign #TrumpShutdown https://t.co/HGPpUYkAyg

Trump has had a peculiar relationship with the Oval Office ever since he took office. Various pictures released by the White House show the president apparently working at his desk, but it’s almost always devoid of documents, folders, or pictures of his family. Compared to past presidents, Trump evidently keeps things remarkably bare, but that doesn’t line up with past pictures of his cluttered desk at his Trump Tower office.

Some have theorized that it’s a security protocol, to blank out legislation before publicly posting it, but that again doesn’t line up with previous presidents, who regularly published pictures of themselves signing legislation.