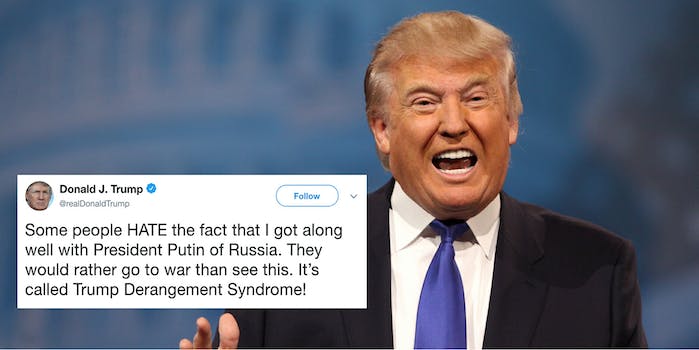 In an interview Wednesday, President Donald Trump stated that Russian President Vladimir Putin is responsible for meddling that occurred in the 2016 election. The statement comes on the heels of the president’s refusal to criticize Putin in a press conference on Monday and days of shifting narratives from Trump about whether or not Russia targeted the U.S.

In an interview with CBS News, Trump said he has already addressed election interference with Putin, the Hill reports.

Asked whether or not he agrees with U.S. intelligence that Russia interfered with the 2016 presidential election, Trump said that he does. He also said that he holds Putin responsible for election interferences and that it’s something he has already taken Putin to task for.

“I would, because he’s in charge of the country. Just like I consider myself to be responsible for things that happen in this country,” Trump said in the interview. “I let him know that we can’t have it, we’re not going to have it, and that’s the way it’s going to be.”

On Twitter Wednesday, Trump insisted his meeting with Putin was a success. “Some people HATE that I got along with Putin,” he wrote. “They would rather go to war than see this. It’s called Trump Derangement Syndrome.”

Some people HATE the fact that I got along well with President Putin of Russia. They would rather go to war than see this. It’s called Trump Derangement Syndrome!