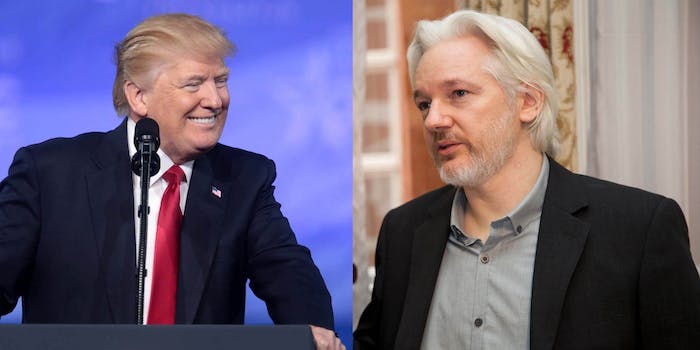 The message was allegedly relayed to Assange by former Republican Congressman Dana Rohrabacher.

President Donald Trump offered to pardon Julian Assange if the WikiLeaks founder agreed to cover up Russia’s involvement in the hack of the Democratic National Committee (DNC), Assange’s lawyers claimed in court today.

The claim was made by Assange’s lawyer, Edward Fitzgerald, in Westminster Magistrates’ Court in London on Wednesday.

Fitzgerald stated that the message was brought to Assange in the Ecuadorian Embassy in London by former Republican Congressman Dana Rohrabacher.

In a statement to the court on behalf of Fitzgerald from WikiLeaks lawyer Jennifer Robinson, Rohrabacher was accused of visiting Assange “on instructions from the president” to offer “a pardon or some other way out, if Mr Assange… said Russia had nothing to do with the DNC leaks.”

District Judge Vanessa Baraitser, who is overseeing Assange’s pre-trial hearing, reportedly agreed that the claim should be admissible in court next week when arguments will be heard over whether Assange should be extradited to the U.S.

Assange is currently facing 18 charges in the U.S., including conspiracy to commit computer intrusion, and could face up to 175 years in prison if convicted on all counts.

Assange’s lawyers have argued against the extradition due to their belief that the case against their client is purely political and not criminal.

According to both the U.S. intelligence community and numerous private-sector groups, hackers working on behalf of the Russian state infiltrated the DNC and released emails and documents in an effort to damage then-presidential candidate Hillary Clinton.

The case against Assange is unrelated to the DNC hack though and instead centers on leaks from former U.S. soldier Chelsea Manning back in 2010.

In a statement, the White House denied the claim, saying that Trump didn’t know Rohrabacher and never spoke with him about offering a pardon to Assange.