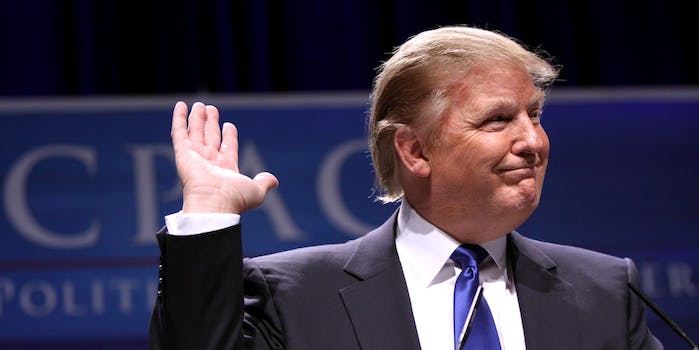 Trump's tweets do not equal endorsements.

President-elect Donald Trump on Thursday said the media is “wrong” to say he backs WikiLeaks founder Julian Assange and is a “big fan” of the United States intelligence community that he has openly criticized.

Trump’s claims, offered in a pair of tweets, come almost exactly one day after the incoming president shared a series of quotes from Assange’s recent interview with Fox News host Sean Hannity regarding cyberattacks and leaks targeting the Democratic Party and high-profile operatives.

Prior to tweeting the Assange quotes, Trump claimed the “‘Intelligence’ briefing” he was scheduled to receive had been delayed, which senior intelligence officials later claimed was false.

The dishonest media likes saying that I am in Agreement with Julian Assange – wrong. I simply state what he states, it is for the people….

to make up their own minds as to the truth. The media lies to make it look like I am against "Intelligence" when in fact I am a big fan!

The apparent dig at the U.S. intelligence community and the tweeting of Assange’s quotes was widely interpreted to mean Trump trusted Assange but not the intelligence community, which Trump has repeatedly and consistently questioned after it reported that Russia’s government was behind the attacks against the Democratic National Committee and John Podesta, Hillary Clinton’s campaign chairman. Trump said this interpretation was the media being “dishonest.”

Seventeen U.S. intelligence agencies have concluded that Russian civilian and military intelligence units orchestrated the DNC and Podesta hacks. Emails stolen from those cyberattacks were later leaked to WikiLeaks, but the source of the emails remains a major missing detail.

Trump’s tweets come just ahead of a Senate hearing regarding the election-related hacks. In an early part of the hearing, Director of National Intelligence James Clapper and NSA Director Adm. Michael Rogers said Assange has put lives in danger.

Clapper asked whether Assange has put lives in direct danger. "Yes, he has." Seconded by Rogers.

The tweets also follow the emergence of a 2010 video in which Trump offhandedly calls Assange and WikiLeaks “disgraceful” and remarks that the publication’s leaks should warrant the “death penalty or something.”