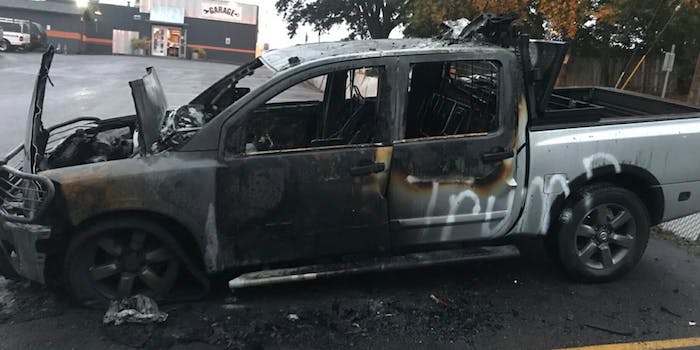 Man leaves truck with Trump stickers at a bar, discovers it’s been lit on fire

The truck was also painted with the word 'TRUMP.'

A man left his truck bearing a couple of “Trump 2020” bumper stickers at a bar in Vancouver, Washington, overnight on Monday. Then someone set it on fire.

“All of a sudden I saw the tires were melted, the windows were shattered, and I was just in shock,” Johnny MacKay told KOIN 6. He had added the bumper stickers to his Nissan Titan pick up only a few days prior.

In a video shared on Twitter, Mackay’s truck can be seen ablaze in the Garage Bar and Grille parking lot. The truck was further vandalized with the word “TRUMP” spraypainted in white letters across one side. MacKay believes that his truck was targeted because someone didn’t like his political views.

Check this video out! A Vancouver man believes his car was set on fire because if his @realDonaldTrump bumper stickers: "If you say anything that someone doesn't like you are ultimately a target. You're automatically the enemy and they have to hurt you." #KOIN6News pic.twitter.com/gIa24VyDzp

“If you say anything that someone doesn’t like you are ultimately a target,” Mackay told KOIN. “You’re automatically the enemy and they have to hurt you.”

One bystander reported that he heard and felt the explosion from his home nearby, prompting him to call 911. No injuries were reported in the incident, and the bar’s owner told the Washington Post she gave surveillance footage of the parking lot to authorities.

Some supporters of President Donald Trump have condemned the incident as an attack by Democrats.

“The left are domestic terrorists now,” read one YouTube comment. “This isn’t helping your cause you LIBTARDS,” read another.

After losing his truck, MacKay said he regretted his decision to use the bumper stickers.

“If I would’ve known somebody would’ve taken politics this far—I saw them, I thought they were funny and apparently somebody didn’t get the joke,” MacKay said.