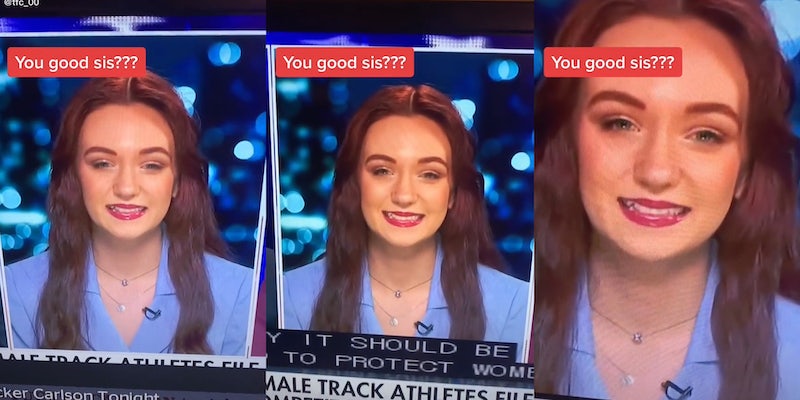 Is she smiling because she's happy or because someone's pointing a gun at her?

Selina Soule is the face of a lawsuit to prohibit transgender high school athletes from competing in sports corresponding with their gender identity. Soule claims she was deprived of the opportunity to excel in track at a Connecticut school because transgender females competed in the sport.

While those who favor inclusion and equality universally revile her, Soule is a darling of transphobes everywhere. For the last year, she’s done countless interviews, typically for right-wing media like Tucker Carlson Tonight, where she’s been a guest multiple times.

All that on-camera experience was for naught on her return to Carlson’s show last night.

Soule tripped over her words and finished the segment with a smile that has the people of the internet alternately in stitches and seriously creeped out.

A TikTok of the segment has racked up thousands of views. User tfc_00’s post of the clip, captioned, “Why did she smile like that at the end,” and, “You good sis????” has hundreds of comments.

“That’s a smile of hating yourself right there,” commented one.

“Is … is she speaking of her own free will,” wondered another.

As the TikTok garnered views, it made its way onto Twitter, where it captured the attention of comedian and LGBTQ ally Kathy Griffin.

“Dear comedy overlords, Thank you for this gift,” Griffin tweeted, alongside a Pride flag.

Griffin’s 2 million followers piled on in the comments.

“Awkward,” said one, to which another commented, “‘Blink twice if you need help.'”

A few were more sympathetic, noting that Soule is quite young and women are often told to smile for no reason, regardless of their feelings at the moment.

But mostly people just made fun of her. Many made jokes about pageants or suggested that she wasn’t speaking of her own free will.

“At this point I’m 90% sure Tucker Carlson’s ‘Experts’ are being held at gunpoint,” opined one.

Soule continues to fight against transgender athletes competing in sports corresponding with their gender identity.