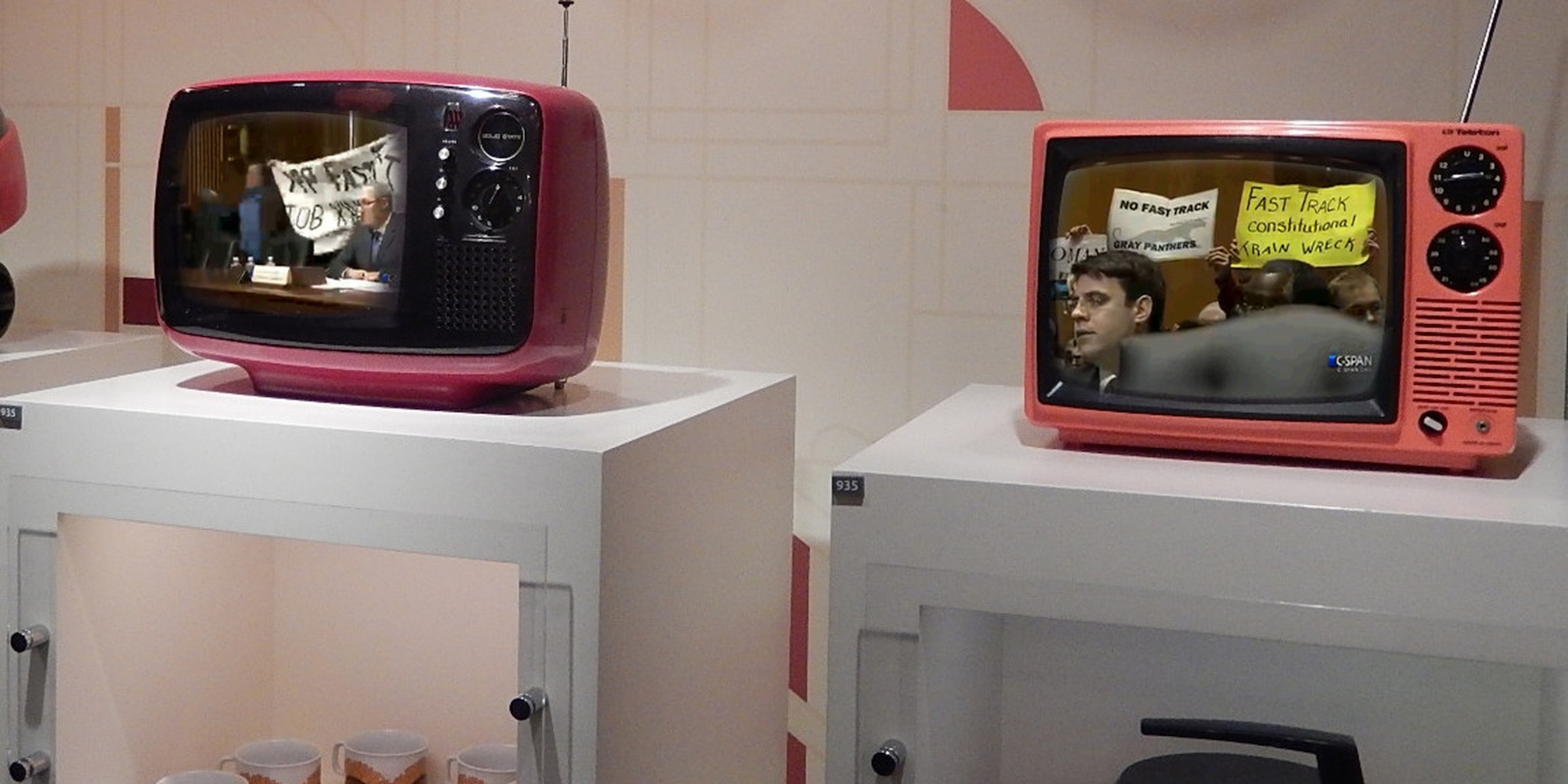 Fed up with secret meetings that will decide the future of trade for more than a dozen nations, a number of protesters swarmed a congressional hearing on the TPP Tuesday morning.

The Trans-Pacific Partnership, a massive trade deal between the U.S. and 13 other nations along the Pacific Rim, would standardize trade relations in a number of different fields. Like any major international trade deal, it’s negotiated in secret, so, save a few very high profile leaks from WikiLeaks, practically no one save negotiating countries’ trade representatives, a handful of elected officials, and lobbyists have seen its working text.

Outrage against that secrecy hit a new high when activists crashed an Senate Finance Committee hearing for several minutes Tuesday morning. It began during a speech from U.S. Trade Representative Michael Froman, the U.S.’s highest official charged with negotiating the deal. Margaret Flowers, a member of Physicians for a National Healthcare plan and a longstanding TPP critic, burst in carrying a sign reading “Trading away our future,” and shouting “we know the Trans-Pacific Partnership is negotiated in secret!”

As she was being escorted away by security, a pair of male protesters entered from another door. “You’re going to super-size NAFTA!” one yelled, as the other simply repeated “No TPP!” The two unfurled a banner behind Froman, who stared straight ahead with an annoyed look on his face

Then a third wave hit: Three protestors sitting behind Froman held up other signs, like one reading “Fast track constitutional train wreck.”

Sen. Orrin Hatch (R-Utah), chair of the Senate Finance Committee, called for order. “Comments from the audience are inappropriate, are out of order,” he said, perhaps ironically given protester’s qualm that lobbyists, instead of citizens of the countries involved, are given access to TPP negotiations.

Hatch invited Froman to continue. But he was interrupted by a fourth protest, an older man in a suit who yelled, “It’s a fraud! Big business corporate secrete deals!”

“You’re not representing your people properly,” Hatch said to the man. “Take him out,” as security cleared the protesters from the room.

Photo via mikecogh/Flickr (CC BY SA 2.0) | Remix and gifs by Fernando Alfonso III