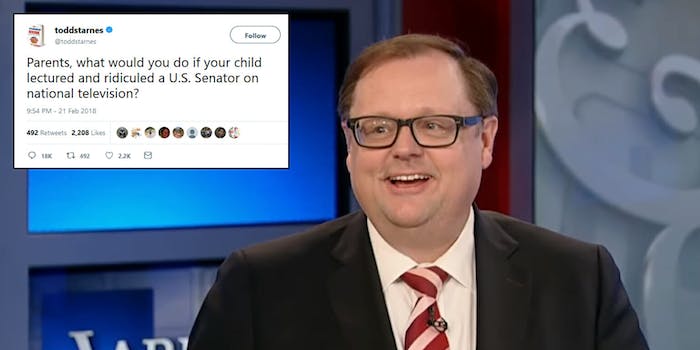 Starnes, who has a history of making dumb tweets and has reportedly suggested that former President Barack Obama was secretly gay, clearly was hoping for a different reaction when he asked his Twitter followers how they would feel if their “child lectured and ridiculed a U.S. Senator on national television.”

As you might expect, Starnes’ tweet was swiftly “ratioed”–with more than 18,000 replies compared to just over 2,000 likes and less than 500 retweets.

Parents, what would you do if your child lectured and ridiculed a U.S. Senator on national television?

The question (which the Fox News radio host clearly felt would have resulted in parents being upset with the way the survivors spoke to the likes of Sen. Marco Rubio (R-Fla.), NRA spokeswoman Dana Loesch, and others) was met with glee from people on Twitter, who suggested they would buy their children ice cream, puppies, or simply would tell them they were proud parents.

This is literally the first thing that’s ever made me consider becoming a parent https://t.co/l7rKoxs9PU

High fives and pour myself a drink for raising a good child https://t.co/y6TxI3rlC6

I would grill that child the finest steak she had ever apprehended you turgid dumbass https://t.co/8RpuYXkuze

"Son, ridiculing Marco Rubio is how you become president." https://t.co/SnXuEXWk9B

Prolly be grateful their kid is alive to do it and speak for the slaughtered students who can’t speak for themselves. https://t.co/iNzStCyVpZ

Disneyland and Legoland would be a lot to tackle in a single trip but we would make it happen https://t.co/uizvDJIg2e

I'd be the proudest dad in America. https://t.co/JgJOGehuzi

Of course, Starnes wasn’t done with his live-tweeting of the CNN town hall. As they say, he must have just been trying to tweet through it.

This crowd is hostile. Do the kids speak to their parents and teachers with the same level of disrespect?

Just like his other tweet–Starnes’ got buried with replies.

How quaint that some folks are more concerned about kids speaking respectfully than the fact that 17 kids were slaughtered with an assault rifle.#StudentsStandUp https://t.co/S1htXAC8Xb

Their friends are dead, Todd. https://t.co/25dkElGAZI

Their parents and teachers aren't actively letting them get shot all the time and taking NRA money at the same time, so I doubt it. https://t.co/N5F3XIKq2J

On Thursday morning, Starnes addressed his ratio-ed tweet, calling it an “informal” poll. His deduction? “A majority of parents say they support their children being disrespectful and belligerent to adults.”