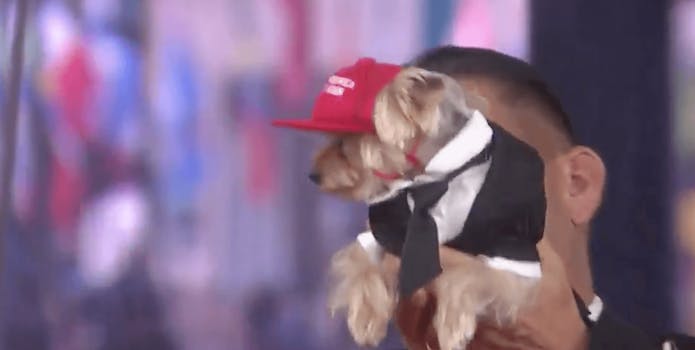 This morning, the Today Show ignored the will of the people by naming a MAGA-hat wearing Yorkie its “Best in Show” during a promotional event.

The MAGA dog was one of six finalists chosen from among more than 1,200 submissions nationwide.

The six included an English Bulldog named Lola who came to slay in a pink dress and pearls, an Australian Shepherd whose companionship helped her owner graduate college, and Bear, an enormous Alaskan Malamute.

During the interview portion, the owner of Vinny the MAGA Yorkie said that while the pup may only weigh three-and-a-half pounds, Vinny believes he’s as big as Bear, which one might say is a fitting disconnect for the self-image of a MAGA dog.

After the interviews, the Today Show asked fans to pull the lever for their favorite candidate.

Vinnie’s meager 10% of the vote put him in last place.

After a commercial break, the judges—actor John O’Hurley and David Frei, who hosts the National Dog Show—announced the winner.

In a move that called to mind the 2016 election, they chose Vinny although he lost the popular vote. Lola came second. They didn’t so much as throw a bone to fan-favorite Bear.

Also reminiscent of the 2016 election, the Twitter fallout was passionate and immediate.

One person blamed Trump fan O’Hurley for rigging the results, essentially casting him in the role of Best in Show’s Vladimir Putin.

Another wondered, as others have since 2016, what’s the point of a popular vote if the Electoral College—AHEM—judges, that is, are just going to overrule it?

Many felt that it was inherently unfair for Bear, who got the most votes, to have to sit there like a good boy while MAGA dog basked in an honor that should’ve been his.

Much like many Americans, some wished they could just enjoy an award show without being reminded of politics.

A few pointed out that the judges have something in common with President Donald Trump’s supporters.

“That was ridiculous,” tweeted @jenniv123. “The two old white men giving the prize to the pup with the least votes wearing a MAGA hat. Unreal.”

“This was so strange. I felt like I was watching Fox & Friends,” said @gingermintjulep.

While perhaps Bear should’ve won, at least Vinny didn’t try to insult Lola’s looks, which is more than can be said for a certain election-winning, MAGA hat-wearer.