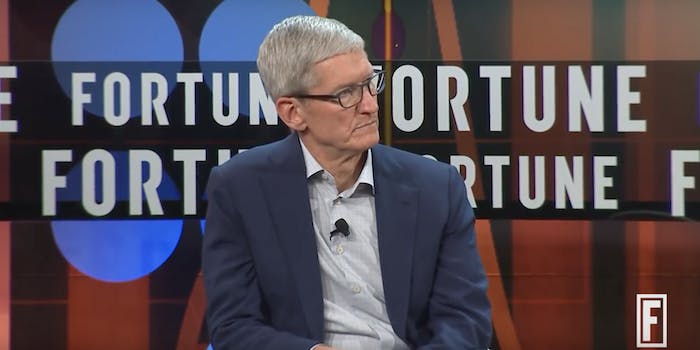 'There are real people behind this.'

Since becoming CEO of Apple in 2011, Tim Cook has increasingly used his position as chief of one of the world’s largest and most successful companies to share messages of compassion and acceptance. He’s also spoken out against a number of Trump policies. At a Fortune event this week, Cook answered questions about immigration, and how that relates to Apple.

In conversation with Adam Lashinksy, Fortune‘s executive editor and author of the 2012 book Inside Apple, Cook spoke on a number of topics including iPhone use, privacy, and our nation’s immigration policy. Cook felt that since Apple has “always been about changing the world,” it has become necessary to speak out on some political subjects he and the company have expertise in. You can’t change the world by “staying quiet about the things that matter,” Cook said.

“To me, too often in the case of immigration, people quickly get to numbers, but there are real people behind this, who have real feelings and they’re a core part of the United States, so we have significant standing there,” Cook said at the San Francisco event.

As a company, Apple doesn’t address politics specifically, saying that it sometimes works with members of both parties or no parties. Its actions are sometimes praised (or hated) by one party or the other.

Apple has more than 300 DACA employees, and several on H-1B visas, so immigration policy is an issue that affects the company’s workforce.

In August, Cook penned an email to employees that explained his disagreement with President Trump’s statements following the attacks in Charlottesville, Virginia. “I disagree with the president and others who believe that there is a moral equivalence between white supremacists and Nazis, and those who oppose them by standing up for human rights,” Cook wrote at the time. “Equating the two runs counter to our ideals as Americans.”

Cook also spoke out when Trump removed our nation from the Paris Agreement, and shortly after Trump took office, he made it clear that Trump’s travel ban was not a policy the company could support.