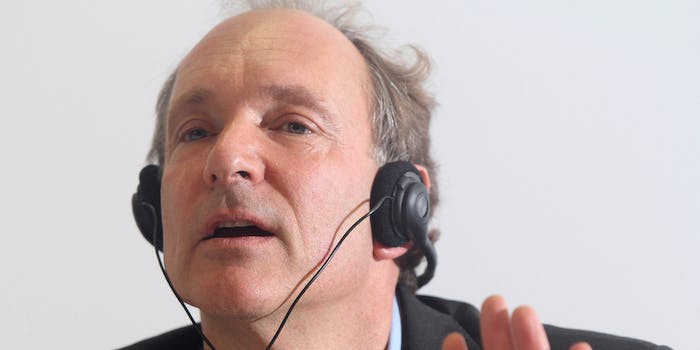 To date, more than half a million people have signed Stop Watching Us, a grassroots petition demanding that the “U.S. Congress reveal the full extent of the NSA’s spying programs.” According to the Electronic Frontier Foundation, Tim Berners-Lee, the computer scientist who invented the World Wide Web, has joined that list.

Berners-Lee is far from the first big name to join the petition. Actor John Cusack, artist and activist Ai Weiwei, and Daniel Ellsberg, the whistleblower who leaked the Pentagon Papers, have all put their names on the petition.

But as the Web’s originator, Berners-Lee is in a particularly good position to speak to the implications PRISM has on the ideas that have allowed his invention to thrive.

Back in 1989, Berners-Lee was a computer scientist at the European Organization for Nuclear Research (known by its French acronym, CERN) when he submitted a proposal for a hypertext system to manage the massive data sets being generated by the lab’s particle accelerator experiments. When the proposal for what would become the World Wide Web was returned to Berners-Lee with a green light to proceed, his supervisor had scratched a note in its margins: “vague but interesting.”

Vagueness would turn out to be a great strength of the Web. From the Web’s beginnings, CERN never attempted to exert any central authority or control over it. Instead, when the lab released the source code for the Web in 1993, it did so for free, letting the concept evolve openly and without constraint.

Last year, Berners-Lee spoke out against the Stop Online Piracy Act, which would give the U.S. government unprecedented control over the accessibility of the Web. “There are times when that could be very powerful and damaging…and it is crossing a line and we have to protect the Internet as an open space, we have to respect it,” he told the Inquirer.

Consistently, Berners-Lee’s arguments focus on the idea that the Web’s success rests in users’ ability to participate in it in a free and democratic manner. The Web, after all is not made for people but by people. As CERN’s history of the Web put it, “A website is like a telephone; if there is just one it is not much use.”