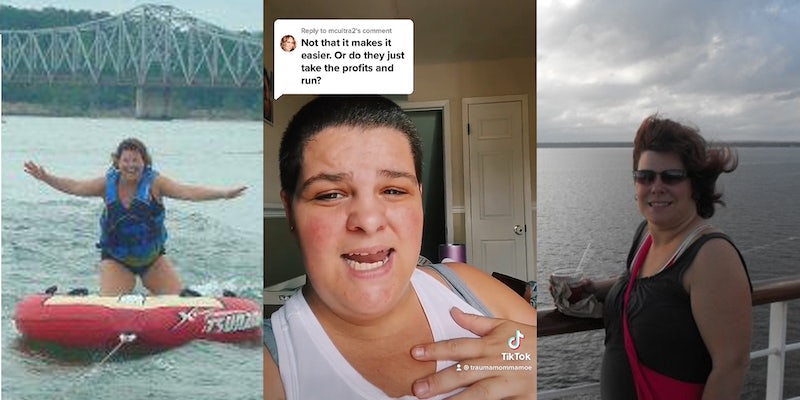 'It just glamorizes the perpetrator and there’s these families that have gone through all of it.'

America is obsessed with murder. True crime has always been a mainstay of the entertainment industry, but in recent years it’s exploded in popularity. Countless podcasts, shows, books, and movies lay out every gory and salacious detail for mass consumption. It can be easy to forget that these are real people, and viewers and listeners are gorging on the most horrific tragedy of their lives.

A TikToker is committed to exposing the hideous underbelly of the true crime genre. Mariah Day (@traumamommamoe) has firsthand experience with the subject. Her mother, Betsy Faria, was murdered on Dec. 27, 2011. Now, the woman Day and prosecutors believe to be the killer, Pam Hupp, is the subject of the NBC miniseries The Thing About Pam.

The details of Faria’s death are irresistible for many who love true crime. The fun-loving and beloved wife and mother was fighting terminal cancer at the time of her death. The motive was allegedly a life insurance policy Faria signed over to Hupp days before her death. In a miscarriage of justice that took years to rectify, Day’s stepfather was wrongfully convicted of her murder and later acquitted. Prosecutors finally filed charges against Hupp last summer, a decade after Faria’s death. Hupp is currently imprisoned for the 2016 murder of a different person, Louis Gumpenberger.

Day says that NBC has now taken her mother’s death and twisted it to their liking with limited input from her and her family. She says shows like The Thing About Pam, a dark comedy starring Renee Zellweger as Hupp, glamourize killers.

“They kind of made [Hupp] out to be a joke, but making her the main character of the show, I just feel like they’re glorifying her, whether it’s good or bad,” Day told the Daily Dot in a phone conversation on Tuesday.

Her TikTok followers agree. Comments on her TikToks, many of which have gone viral, often come from people appalled by Day’s account of her mother’s murder being used as entertainment for the masses.

NBC has defended itself against such criticisms. Last week, the network told BuzzFeed in a statement, “The Thing About Pam is a fictionalized television series based on true events that are heavily documented and in public domain.”

“Since the inception of the project, it has been a top priority of the creative team to honor the spirit of the story while also treating the real people impacted—many of whom shared their experiences as part of this process—with sensitivity and respect.”

Day sees it much differently. She told the Daily Dot that she spoke with someone from NBC over the phone while they were making the show and was led to believe the final product would be much different from what was ultimately released. She said they told her the show would focus significantly on her mom, a DJ who was friendly with strangers and loved to travel.

“I feel like they just told me whatever they needed to say to get me to agree to it,” Day said.

Instead, The Thing About Pam casts her mom as a supporting character in the story of her own murder. She’s only featured in the first of the six episodes; the rest of the episodes delve into the investigation, trial, and eventual acquittal of Day’s stepfather, as well as Hupp killing Gumpenberger in 2016. The show intimates that Hupp also killed her own mother, a crime for which she’s never been charged.

So much of it is dramatized—they even changed her sister’s first name—she wonders why NBC didn’t just change everyone’s name.

“It was supposed to bring awareness to wrongful convictions and just the injustice of it all but it was just a mockery of the situation,” she said. “…It was just a funny little story they could bring to Hollywood.”

Day’s community on TikTok has been a source of support as she navigates the process of seeing the darkest moments of her life passed off as entertainment for the public. She’d long used TikTok to share the details of her life, ranging from the amusing events of parenting a toddler (her son is three) to coping with the trauma of losing her mom when she was 17.

When the trailer came out, Day took to the platform to express her feelings about the show. She’s since shared numerous TikToks about the experience, several of which have gone viral.

People who comment on Day’s TikToks often claim that they and their families have been collateral damage in true crime creators’ quest for money and fame.

“I’m one of the many families who have gone through something like this,” Day said, later adding, “NBC has done any and everything to profit off of this.”

They’re not the only ones turning the death of Betsy Faria into entertainment. Countless podcasts have covered her mother’s murder, Day says. “Not one of them reached to me.”

While Day has a personal issue with NBC’s depictions of her mother’s death, she characterizes the true crime genre as broadly being guilty of capitalizing on people’s suffering.

On TikTok, Day is finding strength and community. The platform gives her space to share her story, her way. “It gives people like me a voice,” she said.

She says that sharing her trauma is also helping her heal and she hopes that her TikToks will open up more people’s eyes to the “unethical” reality of the true crime genre.

Day says it is possible to do true crime stories without retraumatizing survivors.

“I just think that we need to take a step back and kind of figure out a way to move forward with true crime that’s more sympathetic with the families and actually thinks about the victims,” she said.