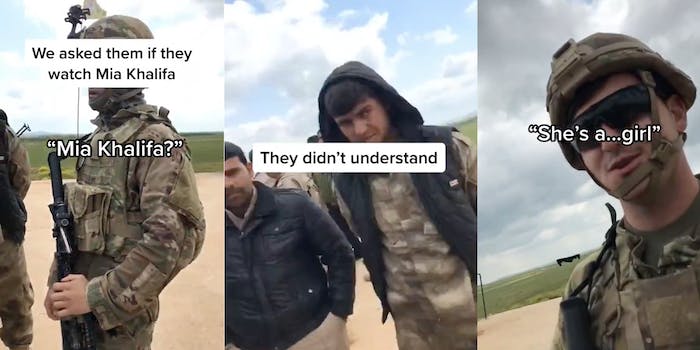 The video isn't going over well.

The footage, posted to the TikTok account of active-duty servicemember Richard Wolfgang, begins with the two groups of men conversing at a checkpoint.

“We asked them if they watch Mia Khalifa,” a caption in the video says.

The video claims that the Syrian men did not understand the question, appearing confused at the soldier’s remarks.

In a comment under the clip, which has earned over 47,000 likes, Wolfgang described the men as “truly amazing people.”

“So fortunate to meet them,” he said.

But the video is drawing controversy online, with many calling the soldier’s comments inappropriate and unprofessional.

Despite only spending three months in the industry and producing a total of 11 videos, Khalifa remains a popular figure.

The video also raised questions about the soldier’s use of TikTok, a Chinese-owned app banned from U.S. government phones due to alleged national security concerns.

“That the soldiers are posting TikTok videos from Syria, where roughly 800 U.S. service members are currently deployed, raises questions regarding the use of the popular app and operational security,” Jared Keller wrote on the military blog Task & Purpose.

Most of the reactions to the video on Twitter, however, surrounded the soldier’s conduct.

Neither the U.S. military nor Khalifa has commented publicly on the video at this time.