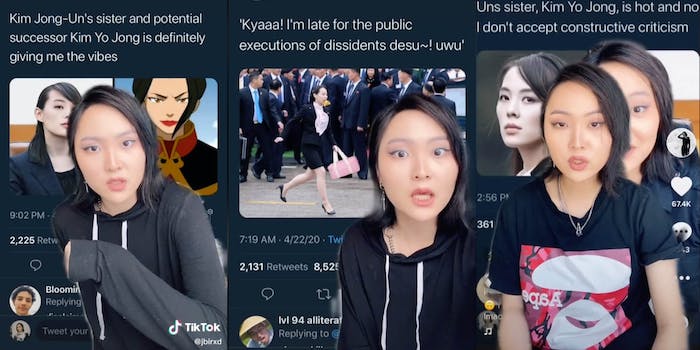 After an influx of still-unconfirmed claims that North Korea’s Kim Jong Un may be in declining health, people are sizing up his sister, Kim Yo Jong, as a possible successor to the dictatorship.

Kim Yo Jong’s possible successorship has become a joke or meme in some circles. TikTok creator Jay Xiao, a politics student at New York University, got fed up with the obsession and made a series of viral videos about the reasons people should un-stan Kim Yo Jong.

“This tops the list of videos I never thought I had to make,” Xiao wrote in her video’s caption.

We’ve reached out to Xiao about her TikTok series.

The first of her TikToks concerning Kim Yo Jung describes the family’s history of human rights abuses and her active role directing North Korea’s propaganda department, leading people to credit her with the “cult of personality” surrounding Kim Jong Un.

“I did not know this needed to be said until today,” Xiao said in her TikTok. “But can y’all not stan possible next-in-line dictators, please?”

Her criticism has been met with backlash.

“Two days ago I made a video about why people shouldn’t stan Kim Jong Un’s younger sister Kim Yo Jong, and then I get a dozen comments telling me that I apparently look like her,” Xiao said in a follow-up to her series. “And OK, obviously I’m biased, but I don’t see the resemblance, I really don’t. But even if I did look like her, y’all did not have to tell me that, I could have lived my whole life happy and content without knowing that I possibly look like Kim Jong Un’s sister.”

In an interview with Buzzfeed News, Xiao said commenters have also labeled her “a ruiner of fun,” and that their “jokes” were above critique.

Xiao also told Buzzfeed News that she believes the obsession with Kim Yo Jong stems from a place of racist infantilization of East Asian women as non-threatening objects.