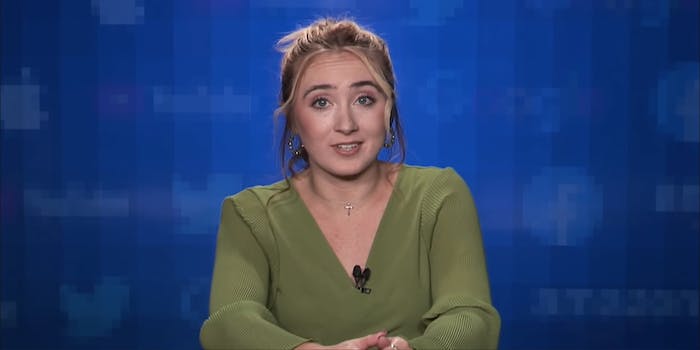 Media Research says this is an example of “big tech censorship.” (Censorship refers to the government policing speech. It doesn’t apply to private companies.)

To that end, the multimillion dollar nonprofit founded by L. Brent Bozell III exposes what it views as prejudice against and censorship of conservative viewpoints. It routinely complains about things like Google rejecting ads for abortion pill reversal and claims social media platforms disproportionately punish Republicans.

On Wednesday, Media Research Center tweeted, “TikTok censored our show exposing Big Tech censorship. They will try to silence us, but we will continue to defend #FreeSpeech.”

“This week, we’ll explain to you what happens when big tech censors a show about big tech censorship,” host Tierin-Rose Mandelburg says in the video Media Research Center tweeted.

“…This is the most ironic example yet. The MRC series about censorship was officially censored.”

In Project Veritas’ video that Facebook supposedly deleted, the right-wing undercover sting operation films a purported physician with the Department of Health and Human Services, seemingly without their knowledge.

The Daily Dot wasn’t able to confirm whether the individual in the video is actually employed with the department. Project Veritas has previously been accused of using phony insiders for its videos. It’s also been accused of doxing and invasion of privacy. Earlier this year, Twitter banned it and founder James O’Keefe.

The video doesn’t appear to be available on Project Veritas’ Facebook page.

Project Veritas, where “whistleblowers” turn on their former employers and often receive large paydays, has lately been on an anti-vaccine crusade. Its social media accounts are full of claims about the COVID vaccine’s efficacy, ingredients, and side effects.

Media Research Center’s video about Project Veritas’ anti-vaccine video getting taken down by Facebook remains on its YouTube channel.

“Their goal is to expose what the government and healthcare system are keeping from us regarding the COVID vaccine,” Mandelburg says in the video.

“For as hard as Project Veritas is working to start a vaccine conversation, big tech is working a gazillion times harder to shut it up,” she adds.

She goes on to describe two other videos in Project Veritas’ anti-vax series. One features a purported Food and Drug Administration employee; the other a supposed Johnson & Johnson employee.

Mandelburg then asks people to report cases of big tech “censorship” and to follow their content to “help defend our freedom.”