This algorithm has March Madness on lockdown

Tired of constantly, mindlessly switching channels? So is Thuuz.

There’s under a minute to play, two points separate the teams, and a birth to the NCAA National Championship game on the line. Thousands of people grab remotes, flipping the channel, hoping to catch the final moments of the dramatic game. They couldn’t have seen such an intense conclusion coming.

Thuuz saw it coming a mile away.

The mobile application developed by Warren Packard acts as an engaged sports fanatic, watching the scores tick across the wire and alerting users when there’s a game worth watching.

Made to point people to the most dramatic moments sports have to offer, Thuuz was actually born out of boredom. Packard, a Chicago native living in San Francisco, was watching his hometown Bears take on his adopted team, the 49ers.

“For some reason, this game—which I had every reason to love—was poorly played and incredibly dull to watch,” Packard told the Daily Dot. “Of course, I was extremely disappointed, especially after committing my time to watch the game and passing on an assortment of other games that I could have been watching.”

From the frustration of Jay Cutler interceptions came the spark for Thuuz. “I started thinking about how great it would be for a service to ‘tap me on the shoulder’ whenever an exciting game was taking place,” Packard said. “That was the genesis of Thuuz.”

Of course, anyone can keep track of a close game. But, as we continue to learn from the development of advanced statistics, the box score often doesn’t tell the full story. That’s why Packard has fine-tuned Thuuz to read into way more than just the score differential and alerts its users when a game is getting good.

Six individual factors are crunched and analyzed by the algorithm that powers Thuuz: pace, parity, novelty, momentum, context, and social buzz. “Thuuz pulls these six different perspectives together to generate a dynamic excitement rating—on a zero to 100 scale, where the average game rating is a 50—for every moment of every game,” explained Packard.

All of these individual ratings weigh differently within the algorithm. It’s not just about catching a close game between the best teams; Thuuz wants to point users to events worth watching, the watercooler moments of sports. “A baseball game that is 10‐0 will be extremely exciting if the dominant pitcher is in the midst of pitching a perfect game. Similarly, a basketball game between two marginal teams that has seen 22 lead changes and is in the second overtime will garner a high excitement rating,” Packard said. 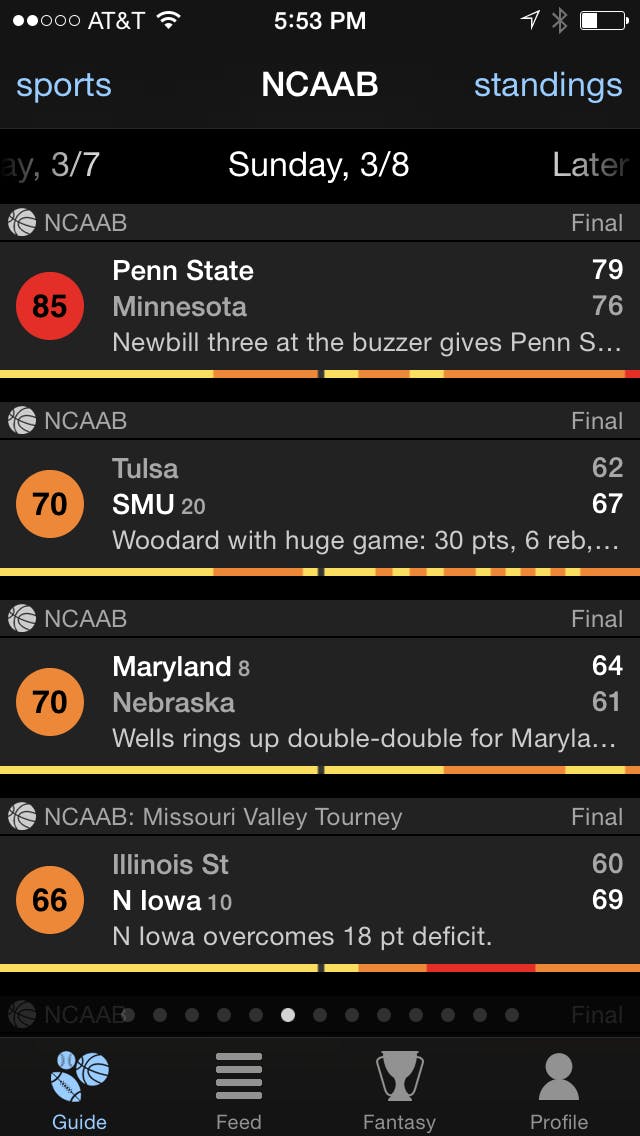 Each one of the factors involved requires in a wealth of data that must be processed to create the ratings. Pace, for example, looks at the number of shots taken or points score on a per-minute basis—the faster the game moves, the more exciting it’s likely to be. Parity points to upsets or well-matched opponents—a 15 seed in the NCAA Tournament about to knock off the two seed, or the two top teams in a division playing for a chance at the conference crown.

The other factors are a little more subjective. Novelty points to unexpected events, statistical rarities, and great individual performances, while social buzz captures the things that the numbers can’t—think the lights shutting off in the Super Bowl or imagine what Twitter would have looked like the night of the Steve Bartman incident. Context accounts for rivalries and the impact of a particular game, giving more meaningful matchups an added excitement bonus. Packard says Thuuz maintains a proprietary database of national and international rivalries that it uses to weigh the games; the more intense the rivalry, the better the score.

Momentum tracks when the pendulum swings from one team to another. “If we observe that the game statistics of the trailing team are currently dominating over the leading team, we know that momentum is to the trailing team’s advantage and that a comeback is quite likely,” Packard said. “Momentum is a very valuable predictor of a game that is trending towards excitement.” Of course, momentum itself is a hotly debated game factor.

Momentum in basketball is particular interest, as it’s almost always a game of streaks. Teams exceed their averages, hitting a high percentage of shots in a row before regressing during a cold stretch and retreating statistically to the mean. This happens over and over again throughout a game, even on an individual level where we see the “hot hand theory.” While some science suggests that there is no such thing as the hot hand (for what it’s worth, new evidence finds it is a real phenomenon that occurs rarely), don’t tell the players that: Most research on the topic acknowledges a player who thinks they’re feeling it is going to keep on firing.

Even if momentum isn’t real, it definitely feels like it is, which is exactly what makes it so difficult to disprove. Believe in it or don’t, but you don’t want to miss out when this year’s version of Steph Curry dropping 30 points on eight three-pointers in an upset win. Thuuz has the ability to point you to those performances just as they’re heating up.

For a service like Thuuz, predictive analysis is just as important as identifying “heat of the moment” factors. Anyone familiar with sports gambling knows that there are hundreds of models and theories that produce expected results for games before they happen; it’s how bookies in Las Vegas generate the lines that move billions of dollars and drive bettors into debt every year.

“Thuuz computes Predicted Outcomes for every team in order to model which future match‐ups are going to be pivotal,” Packard said. Knowing the context for a match beforehand, Thuuz can get a good idea of what might be a game worth watching. As the events play out over the course of the match, the algorithm keeps up with events and adjusts the dynamic score.

If anything, maybe Thuuz’s predictive powers can save you from destroying another remote this March Madness season.

Photo via chillihead/Flickr (CC BY 2.0)