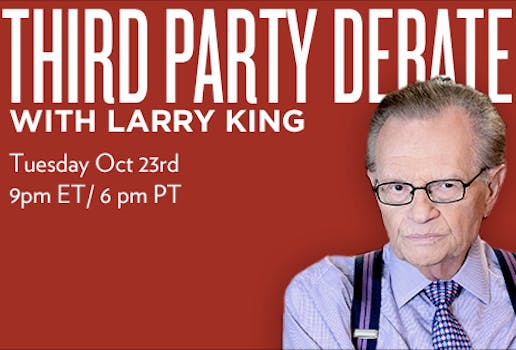 Larry King moderates the real final debate before the election, featuring candidates from the Green, Libertarian, Constitutional and Justice parties.

The news today is dominated by stories about Monday night’s debate between Obama and Romney, allegedly the “last” presidential debate before next month’s election—but many of those stories have it wrong. The actual last presidential debate is taking place tonight, in Chicago—and neither Obama nor Romney will be anywhere near it.

Larry King is hosting the third-party debate between four additional presidential candidates. The debate will be streamed live on the YouTube channels of OraTV, Al Jazeera English and Russia Today, in addition to airing on a handful of cable networks including C-Span.

Russia Today’s English-language website said this about the upcoming debate:

“In response to widespread blackout from both the mainstream media and political establishment alike, RT is honored to be presenting a platform for the major third-party candidates also vying for the White House this election year to debate […] in cooperation with the debate’s organizers, the Free and Equal Elections Foundation.”

The four candidates in the debate are Gary Johnson of the Libertarian Party, Jill Stein of the Green Party, Rocky Anderson of the Justice Party and Virgil Goode of the Constitution Party. They’re not the only third-party candidates aiming for the White House this year, merely the four strongest contenders, with campaigns successful enough to get their names added to the official election ballots of—well, some states, anyway. (The full number of people running for president—seriously or otherwise—is too high to count.)

Obama the Democrat and Romney the Republican are the best-known candidates, the only two on the ballots of all 50 states and the only two allowed to participate in the “official” debates hosted by the Commission on Presidential Debates. The last time a candidate other than a Republican or Democrat was allowed to join in the debates was 1992, when Ross Perot ran as the Reform Party candidate and eventually won almost 19 percent of the popular vote. In other words, there exist millions of adult Americans preparing to vote this November who hadn’t even been conceived yet the last time more than two people took part in the debates.

Green Party candidate Jill Stein already made a token attempt to take part in the second debate between those two; Stein and running mate Cheri Honkala were arrested on Oct. 17 when they tried entering the debate to protest its exclusion of all third parties.

To prepare for the debate, its sponsor the Free And Equal Elections Foundation is also promoting the Twitter hashtag campaign #askemthislarry, inviting questions for King to pose to candidates.

As with any collection of tweets, the responses range from thoughtful commentary—such as @silentquasar’s question “What is the ideological foundation for your stances moral on issues such as gay marriage, abortion, and stem cell research?”—to conspiratorial caps-lock, as when Peace Castle @peacenow_ called the FBI’s attention to his inquiry, ““#AskEmThisLarry When does telling the truth matter? @FBIPressOffice BARACK OBAMA’S KENYAN BIRTH CERTIFICATE”.

The third-party debate will take place in Chicago on Oct. 23 at 9pm ET, and will last 90 minutes.