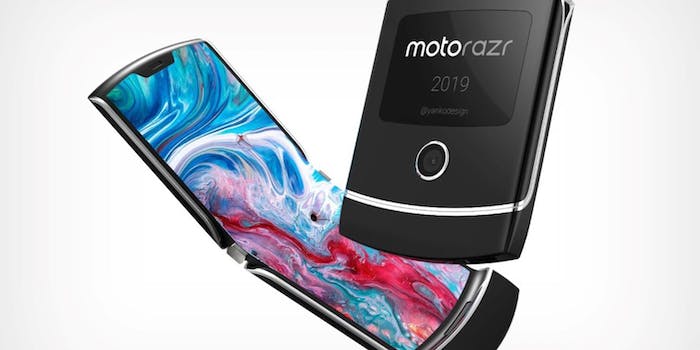 The Motorola Razr is a foldable homage to millennial nostalgia

Is this new effort a shameless attempt to capitalize on the nostalgia hold for their simpler teenage years? Probably.

Yesterday, Motorola announced its first foray into the foldable phone space with the new Motorola Razr. Is this new effort a shameless attempt to capitalize on the nostalgia hold for their simpler teenage years? Probably.

Is it a good phone? Ehhh.

For most people alive during the 2000s, the Motorola Razr V3 was the coolest phone you could own. It was sexy and slim, with a hardy clamshell design that tolerated the most heinous of abuse. I know someone who went to Glastonbury Festival and accidentally submerged his phone in a foot of semi-liquid mud, only for it to stoically continue working as though nothing happened. The Razr played music and had a camera that was (by the standards of the time) half-decent.

These factors combined helped Motorola sell an astonishing 130 million units over the lifespan of the product. It was a level of success Motorola is yet to repeat.

And it’s not for a lack of trying. Over the past decade, Motorola has released a flurry of devices carrying the Razr marque. In 2011, it released the Droid Razr lineup, which was a reasonably-decent (if not somewhat forgettable) nod to the iconic feature phone handset. Although these new Android-powered phones were thin, they weren’t foldable, like the clamshell Razr of yore.

But now, thanks to the emergence of foldable display technology, Motorola is able to produce a device that mimics the aesthetics of its predecessor.

And like every other foldable phone to date, the new Razr is expensive, retailing at $1,500 exclusively through Verizon.

Yes, it’s a carrier-exclusive device, which feels shockingly anachronistic in 2019.

Typically, we’ve been able to excuse (or at least tolerate) the high price of foldable phones because they’re veritable powerhouses. To soften the blow of buying a phone that costs as much as a second-hand car, both the Huawei Mate X and Samsung Galaxy Fold come with fast processors and oodles of RAM.

The foldable Motorola Razr doesn’t. It uses the Snapdragon 710 platform, which typically features on phones within the $300 price range, like the Realme 3 Pro and the Nokia 8.1. Motorola likely chose this slower processor because of thermal considerations, given the small form-factor of the Razr. Still, the fact remains that this is a $1,500 phone with a low-to-mid-range chipset, which is disappointing.

Others may complain about the relatively conservative amounts of RAM and ROM offered, at 6GB and 128GB respectively. Don’t get me wrong, for a mid-range phone, that’s fine. But remember: This is a $1,499 handset, and it’s not unreasonable to expect meatier specs.

The new Motorola Razr also comes with a shockingly small battery. Rated at just 2,510mAh, this sits firmly at the bottom of the Android pack, where devices routinely ship with 4,000mAh and even 5,000mAh batteries.

And then there’s the screen, which has a tall 21:9 aspect ratio, just like the divisive Sony Xperia 10. This means it’s incredibly tall and relatively narrow, which may lend favorably to landscape activities like watching movies and playing games (assuming they’re in the correct format) but will inevitably frustrate in other day-to-day activities. Typing on the Motorola Razr’s narrow display, for example, will require an adjustment to your muscle memory.

I should preface this by saying I’m yet to review the device, and my concerns could be completely unfounded. Sure, it’s hard to engineer a decent experience on such a tall phone, but it is possible to squeeze better battery longevity and day-to-day performance from such austere components. Maybe Motorola Mobility, which is owned by Lenovo, will pull a rabbit out of its hat.

But I have my doubts. The smartphone market has proven again and again that it’s easier to make a bad phone than a good one. And phones that attempt to capitalize on retro designs invariably underwhelm. Plus, the industry has been waiting for foldable phones to infiltrate for years now, and they haven’t managed to make a major impact yet.

Pre-orders for this phone open in December. That said, if I was you, I’d wait for the reviews to come in. There’s nothing wrong with erring on the side of caution.