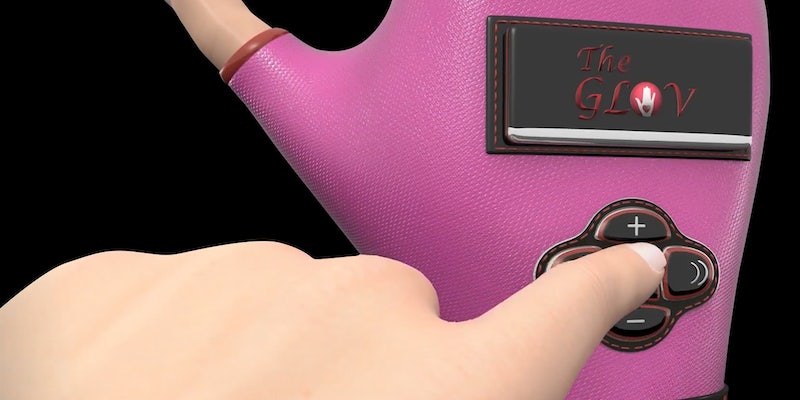 Ladies, can you hand-le this bionic sex toy?

Let’s be real for a second here, ladies: How many times have you been engaging in a little self-love with your Hitachi Magic Wand, only to have to stop in the middle because you feel like you’re developing carpal tunnel?

If you lack the wrist dexterity of a hand surgeon and/or jazz drummer—or, alternatively, if you’re just really, really lazy—sometimes it’s tough to gratify yourself to completion without getting tired or cramping up midway through. Thankfully this Tampa design team is stepping in to give you a hand—literally.

“Currently, every self-penetration device on the market requires the user to hold and operate it in an unnatural and straining way,” the project description summary on Indiegogo explains. “[The user has] to grip the device at its base, hold it at a 90 degree angle, and incorporate the whole arm in order to create the rhythmic in and out motion.”

Here’s a quick (and obviously NSFW) animation to demonstrate:

The Glov was created by Steve Scrase, a Tampa-based businessman and CEO of the startup Glovin Life (!). “I remember thinking about traditional, hand-held sex toys, and how awkward they seemed to use,” he says in the Indiegogo campaign video. His goal, he says, was to design a toy that “worked better and felt better,” offering “maximum stimulation with minimum effort.”

For this reason, the Glov, while intriguing from a sex/tech perspective, might not be practical to implement in your day-to-day self-love routine. (It also seems like it might be kinda unnerving to be fantasizing about Tom Hardy and then looking down and seeing a grotesque silicon Franken-hand furiously manipulating your junk, but that’s another issue altogether.)

All that said, if you’re a lady with, say, back problems, or other health issues that restrict your range of motion, it’s easy to see how the Glov could be a welcome addition to your sexual repertoire. Just maybe try to keep your eyes closed until the Glov has finished, erm, lending you a helping hand.