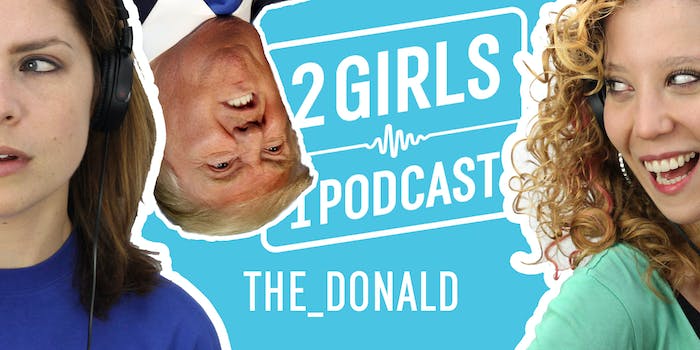 A deep dive into a banned community that did not go quietly.

Here on 2 GIRLS 1 PODCAST, we typically cover online communities that make a positive impact on the internet through their creativity or inclusivity. But not all digital watercoolers are a force for good.

The_Donald, a now-banned subreddit, was home to some of the former president’s most passionate supporters. That, in itself, is barely interesting.

What boggles the mind is how this community rocketed disinformation into mainstream discourse, helped organize the Jan. 6 insurrection, and tore gaping vulnerabilities into the U.S. administration.

This week, Alli and Jen talk with Alex Thomas, a journalist who has studied The_Donald for years (in its various incarnations) and written extensively about the unprecedented ways the president’s own staff leveraged this fringe group to legitimize propaganda and sow the seeds of insurrection— moves which inadvertently left the administration vulnerable to Russian and Iranian trolls.

Read Thomas’s outstanding reporting as part of The Daily Dot’s Trump Disinformation Project, and listen to the interview here: