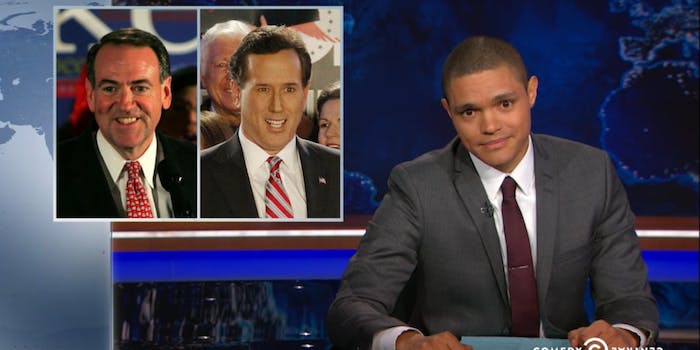 Are the U.K.'s elections more boring and sensible than America's? As it turns out, maybe not.

From an outsider’s perspective, British politics may look bizarrely sensible and boring compared to the drama of U.S. presidential elections.

As The Daily Show‘s Jordan Klepper discovered when he visited the U.K., no one is interested in discussing hot-button issues like abortion, gun control, or gay marriage. Instead, much of this year’s electoral campaign was focused on the economy.

Of course, looks can be deceiving. The U.K. is home to several fringe parties, including the staunchly anti-immigration U.K. Independence Party. It didn’t take long for Klepper to find a UKIP candidate who was willing to quote Hitler on camera, which isn’t enormously surprising given UKIP’s ever-growing list of scandals. Americans can rest easy in the knowledge that even Britain has its own Tea Party.

UKIP got a respectable 12.6 percent of the vote across the country, making it the third most-popular party. Plus, the newly elected government wants to repeal the Human Rights Act. Prime Minister David Cameron‘s Queen’s Speech (the equivalent of his inaugural address) actually includes this line, which sounds like something from V for Vendetta:

“For too long, we have been a passively tolerant society, saying to our citizens ‘as long as you obey the law, we will leave you alone.’”

Basically, the U.K. and U.S. both have their own individual flavors of political craziness, but you’d be hard pressed to say which one is worse than the other.