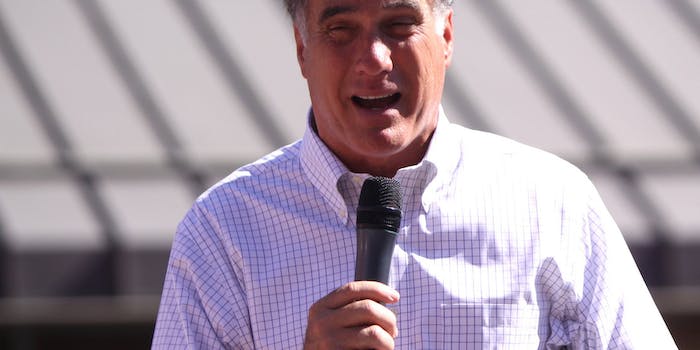 Mitt Romney may not be the most social-network-savvy politician around, but he sure knows his way around a cell phone.

The iPhone messages parody Romney’s wealthy background, cheesy sense of humor, and his ongoing tax return issues. And they do so in a brash and playful way akin to other Tumblrs like Text From Dog, Texts From Bennett, and the now-defunct Texts from Hillary.

“It feels good to imagine Mitt as this frat-boy asshole, because I think a lot of us feel he really is, despite the clean living and the robotic persona,” Douglas told the Daily Dot. “Dude doesn’t party, but he still wants to keep all the money and shut out the poor, the black, and the vag-owning. Wouldn’t he be less loathsome if he admitted it? He’s also deliciously clueless about pop culture and typical American life, like a real Lucille Bluth [from Arrested Development]—and of course there’s a Tumblr for that.”

The conversations are created using bits and pieces of real life Romney gaffes which are then greatly exaggerated for comedic relief. On Slacktory, which is a publishing partner with the Daily Dot, the texts have collected more than 40,000 views and a dozen comments praising Douglas.

So far no one from President Barack Obama or Romney’s campaign has noticed Douglas’s Tumblr. That could soon change, considering Douglas plans on blogging “through to the election—and hopefully no longer.”

“It’s also insurance,” he added. “If Mitt gets elected, at least I’ll have this release valve to channel all my anger and loathing.”