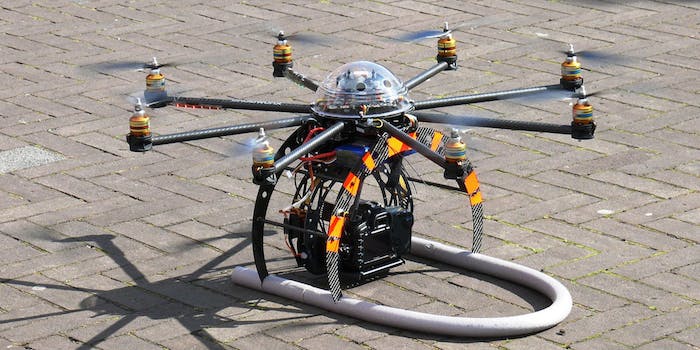 Drones can now deliver your textbooks, but you still have to read them yourself

Overnight shipping? Who has time for that.

We’ve seen drone aircraft deliver a Domino’s pizza, and we were sorely disappointed that the TacoCopter, a flying device for the distribution of tacos, turned out to be a hoax. But the drone delivery game has now expanded beyond fast food: an Australian company wants to use unmanned aerial vehicles (UAVs) to courier textbooks.

Flirtey, a tech startup based at the University of Sydney, is seeking a green light from Australia’s Civil Aviation Safety Authority to start using commercial drones to deliver packages next year—first of all from Zookal, a textbook rental service. This would mark a groundbreaking change for the civilian drone use, which at the moment is tightly restricted around the globe despite a boom in such activity.

Flirtey’s UAVs aren’t operated by remote control; instead, they are fully automated and use “collision avoidance” technology to steer clear of obstacles, as well as a GPS system to guide it via phone signal to a customer, who in turn can track its progress on Google Maps with a smartphone app.

But bringing books to college students on the quad (it doesn’t land, but hovers while you detach its load) is far from the sole potential application here: according to The Age, Flirtey envisions the transportation of various other goods, including blood for transfusions, reducing shipping costs and saving valuable time. And Australia seems to be at the forefront of drone use—as well as drone disaster—already:

Melbourne’s Metropolitan Fire Brigade already uses drones to survey emergency situations and is one of the 56 operators in Australia who have a licence to operate one.  In one recent example, it used a “CyberQuads” drone to survey a truck hanging precariously from a freeway in Melbourne’s north in March. Animal rights activists have also used them to spy on farmers, while Channel Nine’s 60 Minutes used one when it flew over Christmas Island’s immigration detention centre. The craft later crashed into the sea. Another crash occurred earlier this month when a drone collided with the Sydney Harbour Bridge.

In any case, always nice to see one of these things used for something other than long-rage warfare.

H/T The Age | Photo by Piet/Flickr