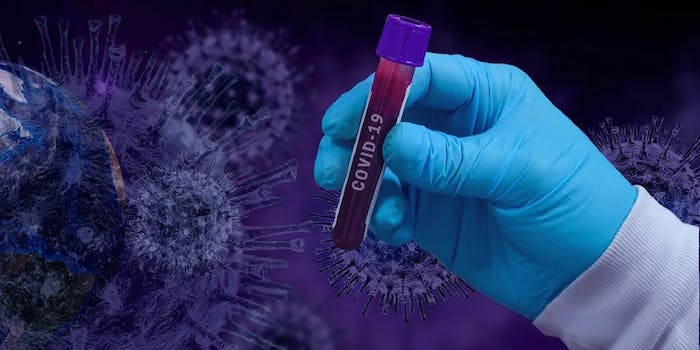 He claimed he was doing it for good.

A Texas man was sentenced to 15 months in prison on Monday after spreading a hoax about attempting to infect others with COVID-19.

Evidence showed that 40-year-old San Antonio native Christopher Charles Perez made two Facebook posts in April 2020 in which he alleged to have paid an individual infected with COVID to lick items at a grocery store.

A Facebook user who witnessed one of the posts, according to a press release from the U.S. Department of Justice (DOJ), alerted authorities who immediately began investigating the allegation.

Investigators with the FBI office in San Antonio eventually determined that the claims made by Perez were actually false, yet violated federal law regarding false information related to biological weapons. Perez was found guilty on two counts of the law, 18 U.S.C. § 1038, and was fined $1,000 alongside his sentence.

In a statement on the matter, U.S. Attorney Ashley C. Hoff described the hoax as “no joking matter.”

“Trying to scare people with the threat of spreading dangerous diseases is no joking matter,” Hoff said.  “This office takes seriously threats to harm the community and will prosecute them to the full extent of the law.”

“Those who would threaten to use COVID-19 as a weapon against others will be held accountable for their actions, even if the threat was a hoax,” Combs added. “Perez’s actions were knowingly designed to spread fear and panic and today’s sentencing illustrates the seriousness of this crime.”

When originally speaking to authorities, Perez claimed he was doing it to keep people from groceries stores, to help stop COVID’s spread.

While Perez’s allegations were a hoax, the pandemic has seen many anti-mask individuals purposely coughing on others and even licking items at grocery stores in protest of health guidelines.