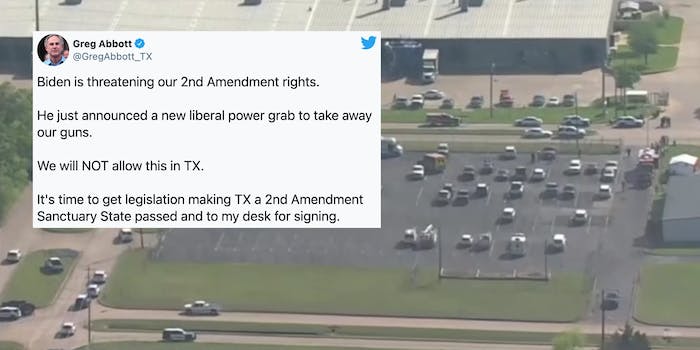 ‘We will NOT allow this in TX’: Texas governor’s pro-gun tweet dragged after mass shooting reported hours later

Six people are reportedly injured after a gunman opened fire in the city of Bryan.

Gun control advocates are criticizing a pro-Second Amendment tweet made by Texas Gov. Greg Abbott that was followed shortly after by a mass shooting.

Abbott on Thursday responded to reports that detailed gun control measures were set to be introduced by President Joe Biden by referring to the move as a “liberal power grab.”

“Biden is threatening our 2nd Amendment rights. He just announced a new liberal power grab to take away our guns,” Abbott wrote. “We will NOT allow this in TX. It’s time to get legislation making TX a 2nd Amendment Sanctuary State passed and to my desk for signing.”

But not long after Abbott’s tweet, a mass shooting unfolded a cabinet store in Bryan, Texas. The latest reports indicate that six people were injured as a result.

Gun control supporters in Texas were quick to highlight Abbott’s tweet in the aftermath.

“Another mass shooting took place in Bryan, Texas within hours of you tweeting this – @GregAbbot_TX. We will NOT allow any more inactivity in TC,” @EhresmanKatya wrote. “When will you step up and protect Texans? You current leadership has left Texans unprotected and unheard.”

Others accused Abbott of outright lying or at the last wildly exaggerating Biden’s plans, which targets untraceable “ghost guns.”

“A proposed rule aimed at reining in ghost guns within 30 days. A second proposed rule, will tighten regulations on pistol-stabilizing braces, like the one used by the Boulder, Colorado, shooter,” @Natanielgon said. “No one is talking to take away your gun, be precise with your words.”

The comment continued pouring in throughout the afternoon, as users on both sides of the debate argued over the proper course of action regarding gun violence.

“There was just a mass shooting in Bryan, Texas,” @jennaaareid added. “4 hours after you tweeted this. What will you do to keep the people of Texas safe?”

At current, Abbott has yet to weigh in on the shooting, at least on Twitter. The governor has only made one tweet since the shooting took place that discusses the coronavirus vaccine.