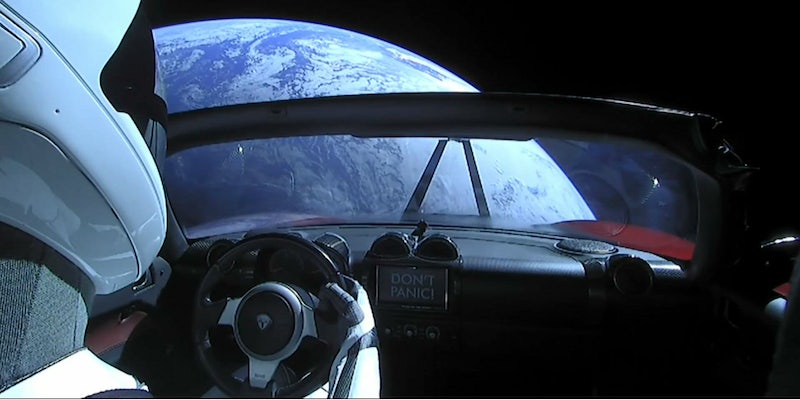 The car will soon disappear from our view.

The livestream keeping us updated on the whereabouts of Elon Musk’s spacefaring Tesla Roadster and its fearless driver cut out last week. But don’t worry, Starman, your home planet is still looking out for you. Researchers from around the world are using high-powered telescopes to track the electric vehicle as it drifts farther away from Earth.

Astronomers at the University of North Carolina at Chapel Hill used images transmitted from the four-meter Southern Astrophysical Research (SOAR) telescope in Chile to measure the changes in brightness of the car. This allowed them to approximate its rotation.

JJ Hermes, a researcher at UNC, posted the findings on Twitter, which show the car doing a full rotation approximately every 4.75 minutes. Other astronomers on Twitter argue the car is rotating every 9.5 minutes because we’re seeing each part of the car twice before it does a full spin. Tesla has not offered its take.

Early this morning we measured the brightness changes of a car tumbling in space! Credit to Erik Dennihy (@UNC), we can report that Tesla Roadster (Starman, 2018-017A) is rotating with a period of 4.7589 +/- 0.0060 minutes. pic.twitter.com/LA4YzdvjK9

Hermes also posted a short time-lapse video on Saturday of the car flying through our solar system. Unfortunately, it’s too far away for any telescope to take a picture of its actual shape. What we’re seeing instead is its reflection from the sun after being blurred by Earth’s atmosphere.

You can see the car blinking in our time-lapse from the 4.1-m SOAR telescope in Chile, taken in twilight on 2018-02-10. The car is already more than 1 million km away, tens of thousands of times fainter than can be seen with the unaided eye. pic.twitter.com/WPHTPjps57

“It looks just like any other star because it’s too far away for us to see any of its shape,” Erik Dennihy, a doctoral student at UNC, told the Daily Dot. “It wasn’t until we saw it moving when we knew what we were looking at. It kind of looks like what an asteroid would look like.”

To determine the car’s rotation, the researchers created a light curve, or a graph that shows the change in brightness of the car as it reflects off the sun. It’s the same method astronomers used last week when they came across a cigar-shaped asteroid.

“This is a very good illustration of what astronomers do on a regular basis,” Hermes told us.

Every 10 seconds for about an hour, the researchers measured the amount of light and compared it to nearby stars. They assume the stars aren’t changing brightness—but the car is. If the brightness levels were high, the astronomers may be seeing sun bounce off its reflective hood or its long side panels. The astronomers at UNC aren’t exactly sure what each peak and trough on the light curve represents, but its patterns suggest the car is rotating at a consistent speed.

Hermes estimates the car is just beyond 1 million miles from Earth and that in the next week, very few telescopes will have the power to see it. By March, only the world’s largest telescopes using a long exposure will be able to capture any light at all.

“The telescope needs to be bigger than the car itself. We just don’t have a lot of these on the planet,” Hermes said.

Astronomers at UNC aren’t the only ones curious about the Tesla floating in space. Astronomer Gianluca Masi at the Virtual Telescope Project in Italy posted an image of the Tesla Roadster on Feb. 8.

“We immediately spotted the Tesla Roadster, quite bright, around mag. 15.5 and moving image after image across the stars,” Masi wrote in a blog post. “At the time of our observations, the car was at about 470.000 km from us. We managed to take dozen of images, and we used a group of them to show the trail of the object across the stars.”

It won’t be long before the midnight cherry car is too far away for us to track. That should free up time for astronomers to make sure the skies are clear for our eventual colonization of Mars.

“In our lifetime we won’t be able to do this again. I don’t think there’s a lot of scientific justification,” Hermes said. “There really is just some new space junk we’ve got now in the solar system. I certainly don’t advocate anyone using a big telescope to keep looking at this thing.”