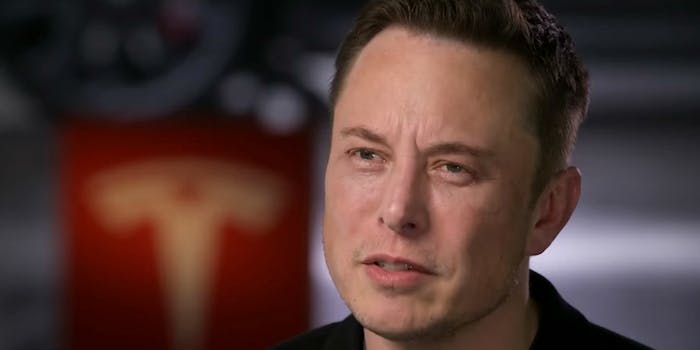 The complaint says Musk sent an email telling employees to be 'thick-skinned.'

Telsa is accused of allowing its factory workplace to become a “hotbed for racist behavior” in the third discrimination lawsuit filed against the electric automaker in less than a month.

A racial discrimination lawsuit filed by Marcus Vaughn, a former Telsa employee, is seeking permission to sue on behalf of more than 100 Black workers whom, he alleges, suffer “severe and pervasive harassment.”

“Although Tesla stands out as a groundbreaking company at the forefront of the electric car revolution, its standard operating procedure at the Tesla Factory is pre-Civil Rights Era race discrimination,” the complaint reads.

Vaughn says he was routinely called the N-word by his supervisors who are responsible for creating an “intimidating, hostile, and offensive work environment” for Black workers. He claims to have filed complaints in writing to human resources and directly to Elon Musk, Tesla’s CEO, but says his concerns were never addressed.

The suit says Musk sent an email to employees in May that suggests people can get away with treating other poorly as long as they apologize.

“…Part of not being a huge jerk is considering how someone might feel who is part of [a]historically less represented group. … Sometimes these things happen unintentionally, in which case you should apologize. In fairness, if someone is a jerk to you, but sincerely apologizes, it is important to be thick-skinned and accept that apology.”

The lawsuits accusing Tesla of allowing a hostile workplace are piling up. In June, former Tesla engineer AJ Vandermeyden filed suit against Tesla for ignoring her complaints regarding sexual harassment. She claims to have received “unwelcome and pervasive harassment by men on the factory floor including, but not limited to, inappropriate language, whistling, and catcalls.” Tesla fired Vandermeyden claiming an investigation showed her complaints were illegitimate.

Tesla was sued twice in October. Former employee Jorge Ferro said he was fired for seeking protection after he was taunted and threatened with violence by his supervisor for being gay. Tesla responded by attacking the media and deflecting blame, explaining Ferro and his manager worked for a third-party contractor.

Three Black employees also sued Tesla, alleging they were subjected to racial abuse by coworkers. They claim to have suffered daily abuse by supervisors and were regularly called the N-word. Tesla said the men never filed a claim.

Update 8:14am CT, Nov. 15: Tesla didn’t hold back in its response to the lawsuit, publishing a statement on Tuesday titled “Hotbed of Misinformation.”

The company claimed it conducted an investigation “several months ago” and found “conflicting accusations and counter-accusations between several African-American and Hispanic individuals.” The N-word and W-word were allegedly used by employees on Vaughn’s team to each other, and death threats were allegedly made. Tesla said it fired three workers on the team.

Tesla also clarified that Vaughn was employed by a temp agency, not Tesla, and that he was never fired from the company.

“The trial lawyer who filed this lawsuit has a long track record of extorting money for meritless claims and using the threat of media attacks and expensive trial costs to get companies to settle,” the statement reads. “At Tesla, we would rather pay ten times the settlement demand in legal fees and fight to the ends of the Earth than give in to extortion and allow this abuse of the legal system.”

Tesla also released the full email written by Elon Musk in which he asks employees to be ‘thick-skinned.’