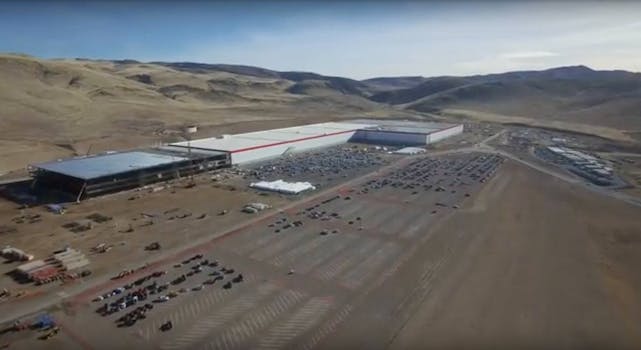 This is not a factory built for ants—those are humans.

Tesla’s “gigafactory” is truly a feat, as new aerial footage of the enormous production plant proves.

Tesla started building its massive gigafactory back in 2014. Housed in Sparks, Nevada, the factory will make Tesla the world’s largest electric car battery maker.  While the project won’t be fully completed until 2020, videographer Matthew Roberts took a drone to the skies to give us a peek at how big this thing really is, and the enormous scale really is astonishing.

The factory is already partially being used to make battery packs, and in 2017, it’ll also start producing battery cells. Eventually, the factory will employ more than 6,500 workers.

Once completed, Tesla’s gigafactory will encompass 5.8 million square feet (that’s larger than 100 football fields, and according to Business Insider, makes it the Earth’s largest building by footprint). Including multiple floors though, it could end up being up to 15 million square feet. Tesla’s building the gigafactory on 3,000 acres of land, which allows for ample space for future continued construction.

Apparently all that isn’t enough for Tesla’s world battery domination plans, though: Founder Elon Musk said that the company is considering constructing a “Gigafactory 2” in Europe. Musk says these gigafactories are important (and necessary) because “they allow us to manufacture high-quality products with economies of scale, making them more affordable and accessible to the world.” One more reason they’re important: bragging rights.