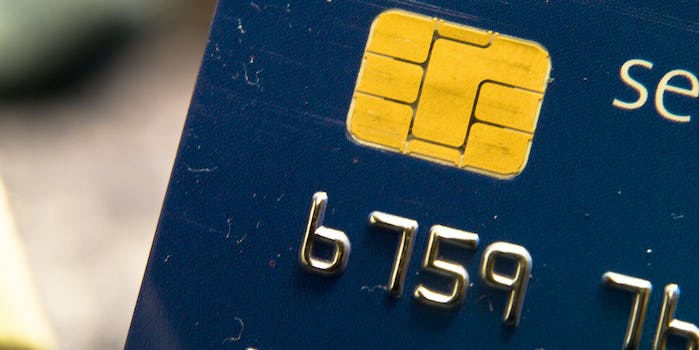 Photo via Ciaran McGuiggan/Flickr (CC BY 2.0)

The 10 worst states for identity theft

Thanks, Internet. Hackers are making off with the personal and financial data of more Americans than ever before.

Identity theft can range from stolen credit card numbers to elaborate phishing scams on Facebook. Tax refund fraud—which happens when thieves fill out fake tax returns to claim a victim’s refund—is another common identity crime. A total of 490,220 complaints of identity theft were reported to the Federal Trade Commission last year, according to the Consumer Sentinel Network Data Book. That’s a 38 percent increase from 2014.

The number of ID theft complaints to the Federal Theft Commission has steadily increased since 2001. 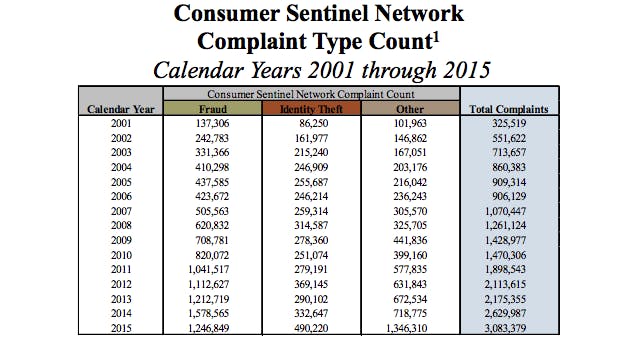 So, where is all this identity theft occurring? Turns out identity crimes aren’t equally distributed nationwide. Personal finance website WalletHub issued a report this month that ranked the states most vulnerable to identity fraud.

The study divided the average amount lost due to identity theft by the number of identity theft crimes per capita. The study also looked at factors such as if the state had an identity theft passport program or a law that allowed parents to freeze the credit reports of minors. Using this formula, the study revealed that California, Florida, Massachusetts, Nevada, and Washington, D.C., were the most vulnerable to identity theft.

But hackers don’t target along state lines, according to Theresa Payton, CEO of cybersecurity firm Fortalice Solutions. “Hackers target where the money is, just like bank robbers,” said Payton in an email to the Daily Dot.

Payton wrote that it’s hard to tell if the results of the WalletHub study are conclusive since many of the states may have had big events going on in their area just as the results were compiled. But that doesn’t mean those crimes didn’t affect people in those states.

Which states and cities are among the worst for identity theft? We took a look at FTC data to find the top ten states for ID theft per capita:

Identity theft in California is rampant throughout the state and doesn’t appear to be concentrated to specific metropolitan areas like San Francisco and Los Angeles. The San Bernardino County sheriff’s office this month just busted an identity theft ring that operated in a Verizon store in Rancho Cucamonga, according to ABC 7 . The state’s attorney general also opened a major investigation in October into whether Wells Fargo committed criminal identity theft by creating millions of bank accounts without customer consent, according to the Los Angeles Times.

New Hampshire may be a small state in terms of population, but it’s been hit hard by identity theft. Reports of New Hampshire residents receiving calls from individuals pretending to be from the IRS demanding payment for past due taxes have been widespread, with the New Hampshire Attorney General’s office receiving more than 1,200 complaints related to IRS scams just this year.

The Lone Star State is host to many creative identity schemes. Just to name a few that happened in Texas this year: an online mail forwarding scam that specifically targeted seniors, a credit card scheme where owners of a Houston restaurant and clothing store targetted their customers, and a member of the Aryan Brotherhood who used a fake credit card to book hotel rooms.

Identity theft is a big problem in the state, particularly in southern Georgia. One woman in Dougherty County was robbed of hundreds of dollars after thieves figured out the passwords to her bank accounts. Dougherty County District Attorney Greg Edwards gave the following advice to Georgia residents:

“Try to determine a password or PIN number’s that you can remember, but are going to be extremely unique to you. That will help deter … persons stealing your information and hacking in because you made it so easy because the passwords are very easy.”

Michigan has become a hotbed of identity theft. Michigan State University was the target of a high-profile data breach in November that put the data of hundreds of students at risk. One Detroit woman pleaded guilty this month to using stolen identities from prisoners in Georgia to file fraudulent tax returns.

Illinois’ high rate of identity theft is made worse by the staggering average amount lost per crime. Illinois lost $10,669 per identity crime on average in 2015. Fortunately, analyst Jill Gonzalez told WAND TV out that Illinois does have some valuable policies related to identity theft, including a “security freeze” law that allows victims of identity theft to freeze their credit reports, including those of children.

Identity theft is on the rise in Maryland. The state’s California-Lexington Park metro region ranks second in the nation for identity theft complaints, according to the Consumer Sentinel Network Databook. A data breach that impacted two dozen Noodles & Company restaurants in the state this summer compromised customer’s debit and credit card information.

Tax fraud is on the rise in the state, as well as nationwide. Comptroller Peter Franchot told Baltimore Business Journal that last year he flagged 20,000 fraudulent tax returns worth more than $38 million.

It doesn’t look like things are getting better: More fraudulent tax returns were submitted in the state of Maryland in the first three weeks of 2016 than during the entirety of 2007, according to Baltimore Business Journal.

Not only is Florida one of the biggest targets for identity theft, but Miami and Naples both rank in the top 10 targeted metro regions nationwide. In 2014, the metro area that includes Miami, Fort Lauderdale, and West Palm Beach led the country with 316.2 identity theft complaints per 100,000 people. The same region slipped to number three on the list in 2015, but the outlook for Florida in 2016 isn’t good: A high-profile data breach affected 63,000 University of Central Florida students back in February.

Connecticut was the lead state in a 2013 data breach of Adobe Systems, Inc that affected 552,000 residents across 15 states. Hackers racked up credit card charges after breaching an entire chain of dry cleaners across the state of Connecticut.

Police in Coventry County told NBC Connecticut that they are seeing a rise in fraud and identity theft across the state.

“To say it is an epidemic would be an understatement,” Sgt. Michael Hicks of the Coventry Police Department told NBC Connecticut.

Missouri has become the nation’s worst target for fraud and identity theft. A staggering 19,195 reports of identity theft from the St. Louis area alone were made last year to the FTC.

A St. Louis caregiver this month defrauded elder patients of more than $30,000. And thousands of current and former St. Louis grocery store workers were the victims of a malware attack on the United Commercial Food and Workers Union.

Correction 8:38am CT, Dec. 9: An early version of this article misstated the unit by which the states’ reports were standardized: Those statistics are per 100,000 people in the state’s population, not per capita.