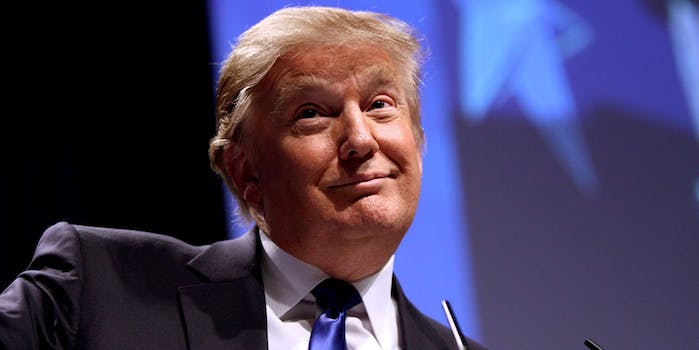 It does not disappoint.

One of the most striking Donald Trump op-eds to emerge in the wake of the 2016 election was published by an unlikely source: Teen Vogue.

In a 1,200-plus word editorial for Teen Vogue this week, Lauren Duca delivers a blow-by-blow breakdown of the unique way she feels Trump has distorted and undermined fundamental notions of how a president-elect is meant to behave. It’s titled “Donald Trump Is Gaslighting America,” with a subtitle characterizing it as a “scorched-earth op-ed.” Suffice to say, it does not disappoint. Here’s an excerpt:

‘Gas lighting’ is a buzzy name for a terrifying strategy currently being used to weaken and blind the American electorate. We are collectively being treated like Bella Manningham in the 1938 Victorian thriller from which the term “gas light” takes its name. In the play, Jack terrorizes his wife Bella into questioning her reality by blaming her for mischievously misplacing household items which he systematically hides. Doubting whether her perspective can be trusted, Bella clings to a single shred of evidence: the dimming of the gas lights that accompanies the late night execution of Jack’s trickery. The wavering flame is the one thing that holds her conviction in place as she wriggles free of her captor’s control.

To gas light is to psychologically manipulate a person to the point where they question their own sanity, and that’s precisely what Trump is doing to this country. He gained traction in the election by swearing off the lies of politicians, while constantly contradicting himself, often without bothering to conceal the conflicts within his own sound bites. He lied to us over and over again, then took all accusations of his falsehoods and spun them into evidence of bias.

While Duca isn’t the first person to have accused Trump of gaslighting— it’s a description that was made on social media with some regularity throughout Trump’s campaign—few have so clearly articulated what it means, why it’s apt, and laid out such precise examples of the phenomenon in action.

There’s another reason Duca’s op-ed generated so much attention, particularly on Twitter. Even as political progressives from across the spectrum hailed her work, the fact that it was written for Teen Vogue came up again and again, whether admiringly, or incredulously, or some combination of the two.

Weird how the most credible, hard-hitting US media right now are Teen Vogue and The Weather Channel https://t.co/XS7FMGJeP6

Teen Vogue is headed by a WOC. You know, if you were wondering why they have more guts than most outlets right now.

Did not expect this exegesis of gaslighting and its relationship to current day politics from Teen Vogue https://t.co/cwNhZ6wvJH

Part of the surprised reactions seemed rooted in a misunderstanding about the difference between a magazine’s target readership and who writes for them. It’s not as though magazines marketed primarily to teens are staffed by teenage writers, nor is their content necessarily confined to the kind of stereotypical subjects that some people might expect.

To the contrary, Teen Vogue—which is helmed by editor-in-chief Elaine Welteroth—has produced compelling political content this year, including coverage of police shootings of black Americans; and the Dakota Access Pipeline protests at Standing Rock, a Native-American reservation that sits between North and South Dakota. In an email to the Daily Dot, Duca herself acknowledged that there was “some stealthy condescension” even in positive reactions to her op-ed.

Being shocked that young women want to engage with current events is pretty suspicious, and totally baseless. Teen girls aren’t aliens who can only think in terms of the fashion and beauty interests that society has dealt them. They can live politically active lives and also want to have nice nails. So often the feminine is cast as separate from and less than. Teen magazines are just one example of that.

Simply put, Duca’s op-ed was in line with the magazine’s current editorial approach. It’s also indicative the kind of political awareness that progressive young women are likely to increasingly be seeking out in the coming age of Trump.