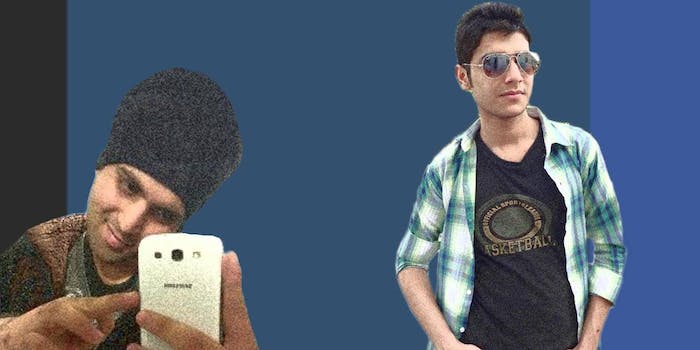 The owners of Facebook's teen spam empire are not who you would expect.

For years, a network of Facebook teen pages have dominated the social network with image spam. Now we have a pretty good idea who runs them.

You may have seen their posts march across your Facebook feed: Teen Swag, Teens Only ?, and Awkward Teens. There are dozens, if not hundreds, pages just like them. They all stand on a sturdy foundation of stolen humor pics (like the ones you might see everyday at Reddit’s r/funny) that are accompanied by blatant begging for likes and shares (“Like if you agree”; “Like if you love your mom”; “Like if you have a best friend.”)

Thanks to chatty teen followers, the pages spread with the ferocity of an Amanda Bynes Twitter meltdown, accumulating tens of thousands of likes, shares, and comments. At independent Facebook analytics site PageData, the teen spam pages absolutely dominate the daily “people talking about this” list.

Perhaps you’e been lucky enough to avoid these pages. If so, here’s a sample of what you’re missing, two posts receiving the kind of social lift that would make your average social media manager’s jaw smash a hole through the floor. 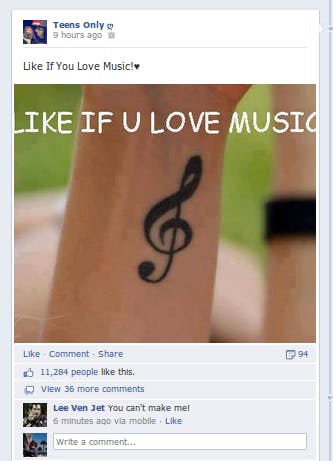 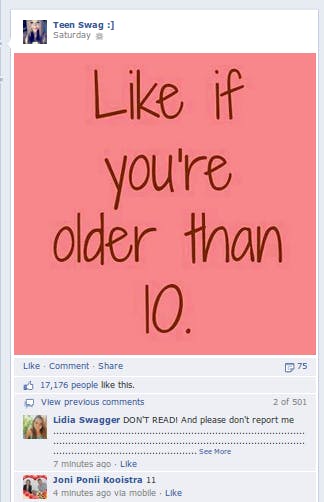 All along, most everyone has wondered: Who is in control? Surely it’s one of the pretty, high school-aged girls that overlook the pages? Right?

No. Or at least, probably not. They’re not girls, and they’re definitely not high schoolers.

Meet Omer Ellahi and Asif Nawaz of Pakistan (pictured above).

We can’t say with certainty that all the pages are run by the same person or group. But some—most notably Teen Swag and Teens Only—share a characteristic that hints very strongly of shared ownership. Occasionally, the Facebook pages interrupt their streams of images with a spammy link post. And each link sends you to the same obscure set of poorly designed humor sites that, like the Facebook pages that link to them, are built on stolen photographs. They’re also littered with ads.

Here are the spam destinations we found over the past week. There may be many more. Most fit into two cookie-cutter design models, suggesting that either the owners are copying one another or, more likely (since the same Facebook pages link to them), the sites were all created by the same people.

Here’s what one recent burst of spam from Teen Swag looked like: 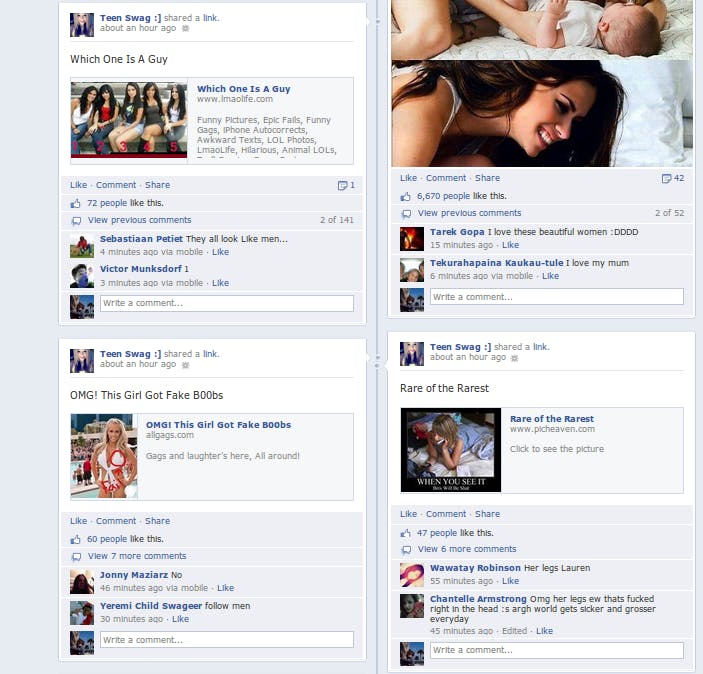 To get a sense of these pages spam are spamming to the domains listed above, just pop one of them into Bing’s social search: 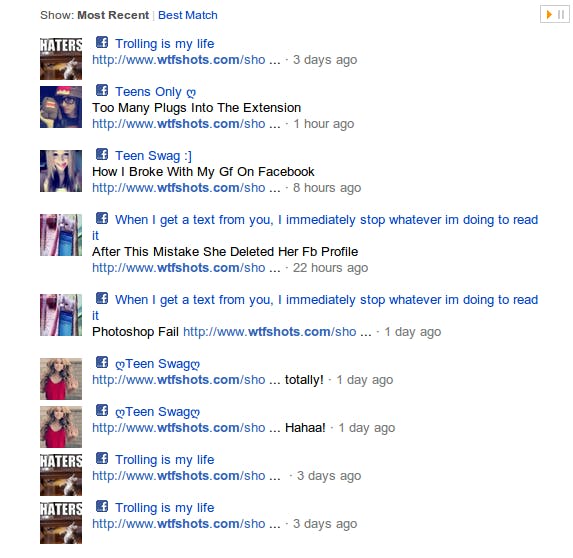 So who owns those sites? Surely they should have some connection to the Facebook pages linking to them, since they are little known elsewhere on the Internet. I ran all of the spam domain names through a search on the Who.is database and came up with nothing. The owner had anonymized his registration at each of the sites—except, however, WTFshots.com, where it must have slipped his mind.

That’s how we found Ellahi Omer, who lists Rome as his home address but hails from Pakistan. 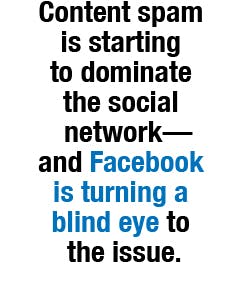 A quick Google search reveals Ellahi Omer is also the registered owner of half a dozen other humor sites that we had yet to see on Facebook. His Twitter account links to another site called “Damn Epic” that is a piece-by-piece clone of WTFShots, from the header to the footer to the “contact” page.

Omer is joined by 19-year-old partner Asif Nawaz, who revealed his Facebook ID on a hidden WTFshots page. Nawaz’s “favorites” page on the social network reads like a who’s who of Facebook image-spam sites. We know a little about him from his Facebook profile: He has a bachelor’s degree in computer science, likes pop stars like Justin Timberlake, and voted for the centrist Pakistan Tehreek-e-Insaf party in the country’s recent elections.

“Im a very goal and career orientated person,” he writes on another social media profile. “i like to challenge myself and push myself to the best of my ability. So what if people don’t like me, who cares? Im not frightened by anyones perceptions of me””

A Freelancer.com profile page declares him owner of the site WTFSHOTS.com and something called TheFunnyJunk.com (which is clearly copying the name of humor site “FunnyJunk“).

Like Omer, Nawaz uses Twitter for sending a stream of spammy links to another one of his Facebook pages. Either Nawaz and Omer own the Facebook spam pages that link to their sites, or they have some kind of business relationship with them.

To find out, I reach out to Nawaz by email, asking if he was willing to talk about his site, WTFShots. “Yes,” he replied.  I immediately wrote back:

I’m curious if you have any relationship to pages like “Teen Swag” and “Teens Only,” since they link to your site so often (here’s one from today).

Nawaz did not respond.

Do the subscribers of pages like Teen Swag and their ilk believe the people who run them are teens—like the ones peering down from their profile pictures? Facebook forbids deceptive cover images. If two grown men are behind behind the teen pages, surely hiding behind a young girl’s photograph is deceptive.

At the same time, I’ve argued in the past that disguising spam links with images is inherently deceptive, too, and it’s surprising that Facebook lets these pages exist in the first place.

The blame only partially falls on the shoulders of Nawaz and Omer. The guys are just trying to make a buck on the side. Their spam is obnoxious to many of us, but it’s not even close to illegal or immoral. (Yes, it’s deceptive, but there are no victims, no cost to the people who click through except for a few seconds of their time.) And Omer and Nawaz are hardly the only ones relentlessly spamming Facebook, as we exposed earlier this year. In fact, the majority of Facebook’s most talked about pages all work on a similar model. 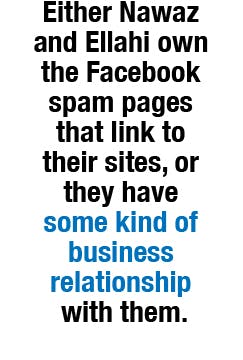 More important: What does the dominance of pages like Teen Swag and Teens Only say about the future of Facebook? The company’s early success was built on the sturdy glue of close personal ties. People signed up for an account because they wanted to stay connected to their friends and families. Content spam is starting to dominate the social network—and Facebook’s turning a blind eye to the issue, even embracing it. At the much-hyped announcement of Facebook’s newsfeed redesign, founder Mark Zuckerberg actually declared that Facebook’s goal was to become a “newspaper”: a rather explicit admission that Facebook’s future is a content firehose.

You can see the change, too, in Facebook’s ever-evolving mission statement. In 2006, Facebook was “a social utility that connects you with the people around you.” By 2008, social relationships had moved to the core of what the company was about: “Facebook helps you connect and share with the people in your life.” But nowadays who you share with is less important than just sharing. The statement now reads: “Facebook’s mission is to give people the power to share and make the world more open and connected.” The power to share.

The mission statement’s changes reflect a full corporate lurch in the direction of Facebook’s competitors. Twitter and Tumblr and even its own recent acquisition, Instagram, are all sites whose social networks work very well at sharing media. The problem here is that when your newsfeed literally becomes a news feed—or, rather, a feed of stuff on the Internet—you’ll begin to define your connections on Facebook not by their relationship to you but by the quality of their content.

According to a February Pew study, 61 percent of Facebook users have taken a multi-week break from the site. Of those, 20 percent said they left for one of two reasons: “Just wasn’t interested/just didn’t like it” and “Waste of time/content was not relevant.”

Content was not relevant. That’s a phrase Facebook may be hearing a lot more of in years to come. Content, after all, was not why you signed up for Facebook in the first place.