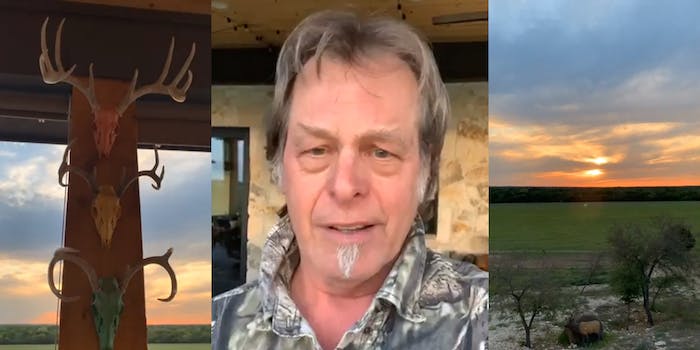 The singer referred to COVID-19 as 'the Chinese sh*t.'

Ted Nugent, noted racist, COVID-19 denier, and occasional hitmaker, announced last night that he had tested positive for the virus.

“I got an announcement to make,” Nugent said in a Facebook Live video. “Everybody told me I should not announce this, but can you hear it?”

“I have had flu symptoms for the last 10 days,” the “Cat Scratch Fever” singer continued. “I thought I was dying. Just a clusterfuck.”

After several digressions, Nugent finally cut to the chase. “I was tested positive today. I got the Chinese shit,” he said in reference to the coronavirus, which he also called the “Chinese virus attack ’21.” The rocker confessed he could “hardly crawl out of bed the last few days.”

Nugent revealed that he had not received a COVID-19 vaccine because “nobody knows what’s in it.” He previously downplayed the severity of the virus on several occasions. During a Christmas Day Facebook Live, Nugent said, “It’s not a real pandemic, and that’s not a real vaccine. I’m sorry. I ain’t taking no vaccine. You come at me with a needle, and I will be in fear of my life, and you know what I’ll do if you come at me with a needle.”

The guitarist added that he was “homebound, i.e. quarantined” for the time being. He also saluted My Pillow CEO Mike Lindell and implored viewers to “counterpunch the haters and the Marxist, cancel culture punks by supporting the people that they hate.”

That empathy must have come from Facebook, because on Twitter, people were tickled that another right-wing conspiracy theorist and anti-vaxxer had contracted COVID-19 after ignoring all the warnings and public safety protocol. Keep in mind this is the man who scored his biggest hit in 1977 singing about contracting an imaginary disease. The jokes wrote themselves.

“Ted Nugent, a long Covid-19 denier and conspiracy theorist, has come down with a bad case of it, calling it the ‘Chinese sh*t’ in a racist video rant,” actor George Takei tweeted. “But maybe it’s not even Covid. I’m thinking it’s just Cat Scratch Fever. Yes, karma has a sense of humor.”

“We sure Ted Nugent has COVID-19? He seems more like the type who would have a COVID-13 or younger COVID,” tweeted film director Jeremy Newberger, a not-so-subtle reference to the allegations that Nugent had sexual relationships with two women when they were under 18 years old.

According to some Twitter users, COVID-19 may not be Nugent’s only health concern. Wrote Jeff Tiedrich, “#breaking ted nugent also tests positive for being a ginormous pants-shitting idiot.”