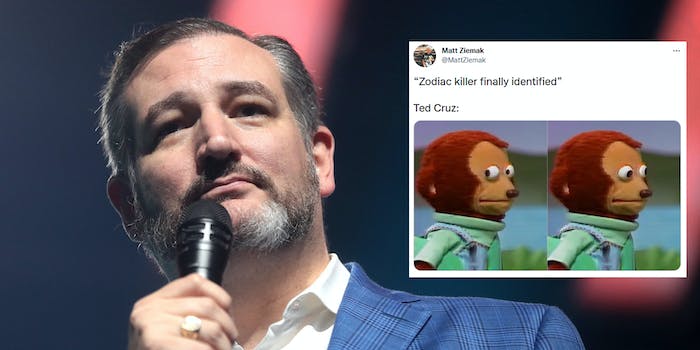 'Oh yeah? That's the identity of The Zodiac Killer? Then explain… TED CRUZ!'

Investigators who specialize in cold cases have reportedly identified the Zodiac Killer, and it turns out it is not Sen. Ted Cruz (R-Texas.)

The “Ted Cruz is the Zodiac Killer” meme has been going on for a while. It gained momentum during Cruz’s ill-fated presidential run in the 2016 election and has essentially become a common joke that seems to come up online every time the Texas senator makes a bad tweet.

Cruz himself seems to be aware of the whole thing. In 2017 he tweeted out an image of the cryptogram the Zodiac Killer sent to the San Francisco Chronicle in 1969.

Fox News reports that “the Case Breakers,” a team of investigators, journalists, and military intelligence officers, have identified the Zodiac Killer as Gary Francis Poste. Poste died in 2018. The Zodiac Killer was never caught.

The latest news about the Zodiac Killer has once again reignited the meme, with many people sarcastically joking that the news of Poste wasn’t true and that Cruz was still secretly the infamous serial killer.

“‘Independent investigators funded by ted cruz say that the zodiac was definitely not ted cruz,'” one person tweeted.

“***New: Zodiac Killer identified by team of independent investigators as Ted Cruz all along,” another person tweeted, jokingly editing a headline from a news outlet about the Poste news.

“Oh yeah? That’s the identity of The Zodiac Killer? Then explain… TED CRUZ!” another Twitter user wrote, reacting to a news article.

There were a lot of similar jokes floating around Twitter on Wednesday afternoon.

Unlike in the past, Cruz has not yet weighed in on the news.